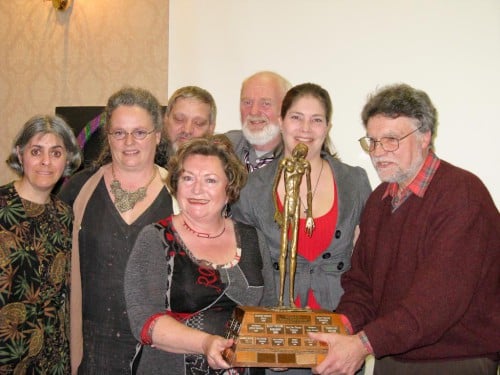 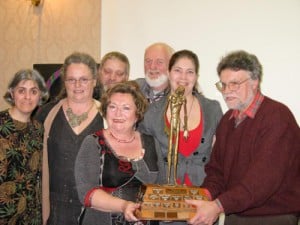 GORE BAY—To thundering applause and a standing ovation, Gore Bay Theatre received the 2012 Quonta (Northern Ontario) Drama Festival ‘Outstanding Production Award’ for its humorous and poignant production of ‘The Attic, The Pearls and Three Fine Girls,’ in Elliot Lake this past weekend. This is their third Quonta win, having done so in 2007 and 2009, and also placing second in 2008. Gore Bay Theatre did not enter the festival in 2010 and 2011.

Gore Bay’s entry was one of five productions presented during the week of theatre and has now earned the right to advance to the provincial finals, which features winning groups from across Ontario.

Perhaps the most enthusiastic person in attendance at the Gore Bay Theatre performance was Terry Tweed, a Theatre Ontario adjudicator with over 40 years of experience, who critiqued the group’s performance along with those from the other communities.

Ms. Tweed called the production, “beautiful, with many funny and heartfelt moments. I love the music, the simple yet extremely effective set, the way the lighting evoked the mood and emotion of the play, the effective costumes and the outstanding performances by all three cast members. All aspects of production and performance were expertly executed. I personally know the authors of this wonderful Canadian play and they would be very pleased with this production.”

Ms. Tweed was also very impressed with the visual aspects of the production because she awarded the group the ‘outstanding visual presentation’ award. Many of the other groups had elaborate and complicated sets, but Gore Bay’s production had a few panels to represent the crumbling skeleton of a house strategically placed on the stage.

Director Walter Maskell, whose plays have received multiple awards at the regional, provincial and international levels for visual presentation stated, “the set, lighting and Kim Kelly’s beautifully designed costumes, and Tim Lalonde’s master carpentry all contributed to advance the themes of the play and create stage pictures that were memorable.”

“With Bill Viertelhausen’s flawless operation of sound, the technical aspects of the production were lauded,” said Mr. Maskell. “As well, the group was also nominated in the technical achievement award. You cannot go wrong with simplicity because it is usually the most evocative and creative. I think that most audiences want to see an imaginative production by the designers, actors and director. And sometimes necessity is the mother of invention.”

“Our production budget is not anywhere near what the larger centres can afford,” said Mr. Hawke. “For example, one of the groups in the festival had a set that a construction team of 10 had to build. Another group had over 40 people on stage with another 40 production team members. We simply do not have those kinds of resources.”

The entire cast was also praised by the adjudicator and each actress was singled out and nominated for the award for outstanding performance by a female in a leading role. Tara Bernatchez, Anita Lalonde and Shannon McMullan were all nominated for their deft portrayals of the three Fine sisters.

“They are a team and I cannot separate them,” said adjudicator Terry Tweed.

Ms. Maskell stated that, “this is very much an ensemble show, with all three actresses contributing in changing the scenery. They are virtually in every scene and do not get a rest because there is no intermission in this production. It shows their depth and skill and is a testament to their commitment, dedication and talent.”

“The cast received an immediate standing ovation from the appreciative Elliot Lake audience (after their performance last Friday), and it was very satisfying,” said Mr. Maskell. “When you are not the home team and you get that kind of recognition, you know you are doing something right.”

Mr. Maskell was also chosen as the ‘Outstanding Director’ of the festival. This is his ninth award for directing at the Quonta Festival. He stated, “it is always rewarding to be honoured among such a strong slate of directors. One of the Sault groups and the North Bay group have been in existence for 60 years and are very experienced, sometimes using professional directors, so it is always an honour.”

The group will now plan on fundraising to take them to the Theatre Ontario Festival to compete against the top theatre groups in the province. “We are the smallest community in Ontario to ever get to the provincials, but we get a lot of support from the community and from Island residents,” said Mr. Maskell. “We are very proud to represent them. We will be competing against cities from the south with all their resources, but we also do that here in the North. Imagination and creativity have nothing to do with size.”

Gore Bay Theatre has become an ambassador for the Island, and tourism. “Every time we go to the provincials, more and more people and groups know who we are and that we can compete against the best in the province,” continued Mr. Maskell. “They are amazed that such a small community can consistently produce award winning theatre.”

The group will now plan a number of fundraising activities and will be remounting the production in May for a tune-up before going to the Theatre Ontario Festival.