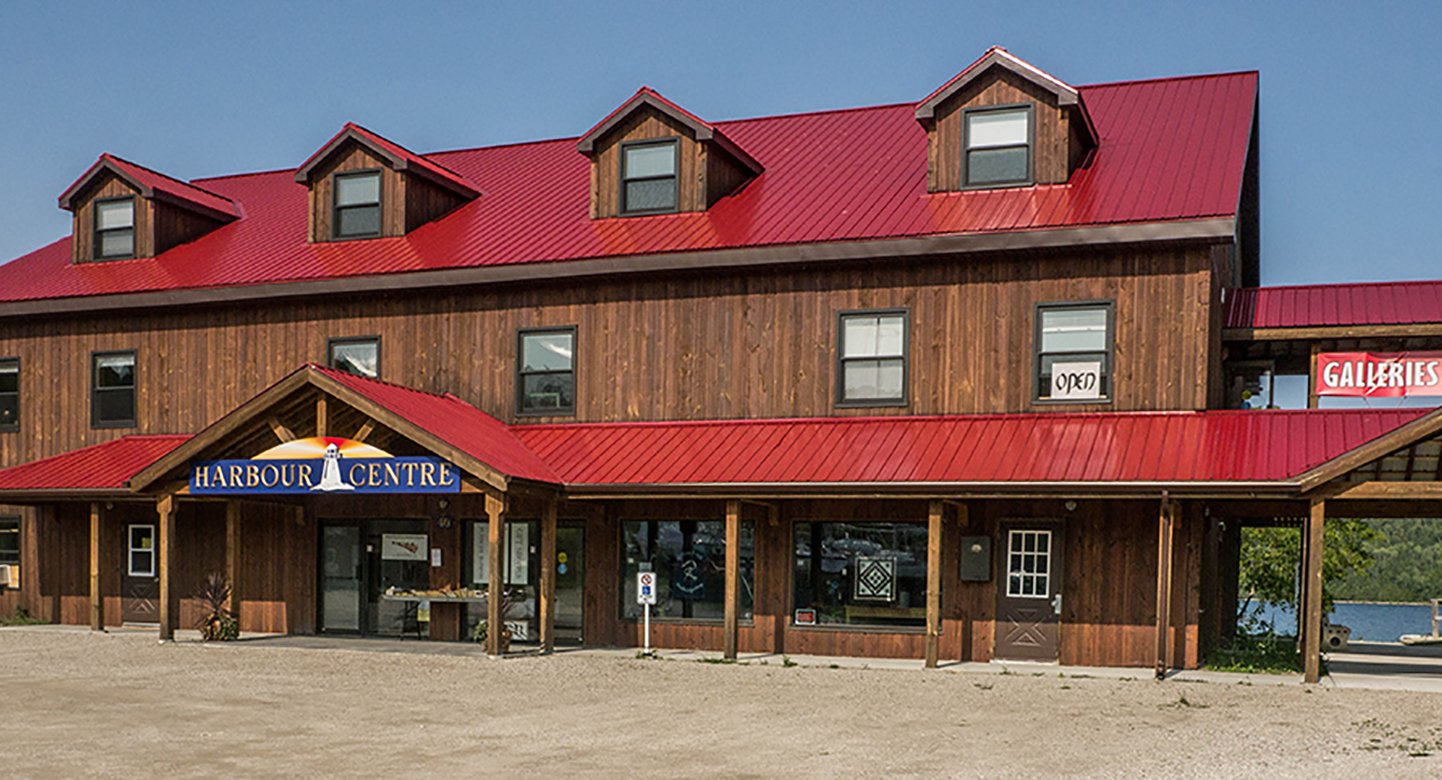 The imposing wood structure sits on the waterfront near the marina on the road to the Janet Head Lighthouse. Construction finished in 1985 when the town’s plan was for the building to serve as an incubator for new businesses. That worked for a period but eventually the building was put up for sale in 2010.

“The idea to develop this building as a cultural centre and marine museum came from the museum board,” explains Nicole Weppler, the director of the Gore Bay Museum who is an avid arts supporter and mentor to many artists. Ms. Weppler, with the backing of the board, applied for and was awarded three major federal and provincial grants for the project, with a feasibility study funded by LAMBAC. “We approached artists to gauge their interest in the project, and the response was overwhelmingly positive,” says Ms. Weppler. “It gave us the confidence to approach architect Brian Garratt, the designer of the museum’s new galleries that opened 10 years ago.”

Mr. Garratt designed a plan to refit the Harbour Centre, and did so “with great sensitivity. Brian understands what he’s looking at, he’s an excellent listener and asks about the use of each space before deciding how to treat it.” The Harbour Centre’s three floors of shops, galleries, studios and marine museum are expansive and high-ceilinged, the reclaimed hardwood floors gleam and the re-purposed heavy timber beams from the old Silverwood Creamery in Toronto are the object of wonder at their commanding presence. There is a meditative and tranquil mood in the building that comes from the harmonious melding of materials with the purpose they serve. Working artists engage with visitors the as they flow in and out, up and down the stairs and onto the verandah wrapped around three sides to gaze onto the beach below, the bluff and the North Shore on the horizon.

The Harbour Centre’s entrance on Water Street leads into a bright lobby with an ongoing book sale, a fundraiser for the Gore Bay Museum. To the right is Scissors and Silk, Linda Noe’s fibre art studio. She cuts fabric into hundreds of tiny pieces, forming leaves on tree branches, waves in water, flower petals or subtle tonalities in a house’s exterior, “layering the fabric in a collage,” which is then sewn expertly on her sewing machine by the large picture window.

Beyond, the ground floor is home to a public gallery and adjacent kitchen (with art by Michael Robinson currently on view) that doubles as community space for workshops such as knitting, quilting, music, writing and watercolour painting as well as for concerts and exhibitions, all led and supported by creative community members and fellow artists Debbie Colville, Christie Best-Pearson, Margo Little, Sylvia Fletcher, Jane Best and many others.

A wide staircase leads to the second floor, as does a full-access ramp from the parking lot on that level, leading to several studio-galleries and shops.

Lynne Gerard has been a tenant in the Harbour Centre since 2006, “when there was a stained glass studio, a motorcycle repair shop and a fish hatchery here. Today the snow no longer drifts into the studio and I don’t need to work wearing scarves and gloves to ward off the cold.”

Ms. Gerard is the artist behind Ravenseyrie Studio and Art Gallery, a beautifully appointed space with an eclectic array of antique furniture and shelving separated into a distinct working area and a separate shop where she sells her original paintings, prints, greeting cards and ‘painted stones.’ The artist produces everything in-house, printing on fine art paper and framing and packaging her work for repeat customers who love her watercolour renditions of horses, ravens, sandhill cranes and other Island fauna and flora accentuated with her soulful calligraphy poems. Her painted stones emanated from her study of ancient cave paintings: “I use natural pigments, referencing old scientific papers to prepare the same mix used in prehistoric times,” says the artist. 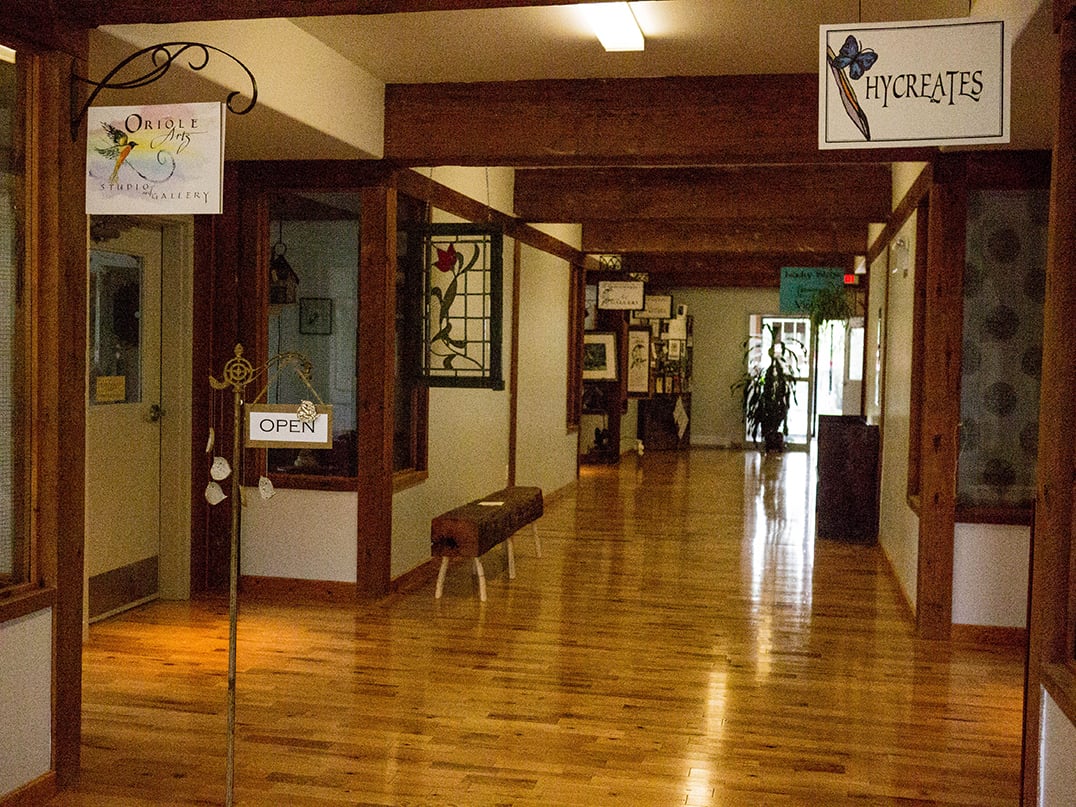 Ms. Gerard also studied Chinese painting and found a style from 960 AD called “the three perfections” that combined poetry, painting and calligraphy into one art form. “That was exactly what I wanted to do, it was the validation for me to keep going with what I loved.”

Across the hall is Whytes, owned by Ashley and Dylon Whyte, featuring the paintings and collages of iconic Gore Bay artist Jack Whyte and a selection of original paintings and collages, prints, postcards and ‘pocket art’ of his work. Also featured is the work of Anishinaabe artist Mark Seabrook, wooden walking sticks and flutes by local carver Will Smith, jewellery, chainmail and ‘bleachwear,’ a nod to the psychedelic era of tie-dyed clothing. Says Dylon: “We display a combination of fine and applied arts. This is our third year in the Harbour Centre; we came here after selling at farmers’ markets on the Island because we wanted to reach out to a broader audience. Here we can access a larger world audience through our Internet sites and projects. We enjoy the educational exchanges that happen here between artist and visitor. We’re proud to be here, this building is a jewel for the town.”

Next door is Lucky Stone Vintage, owned by Pam McLaughlin, specializing in antique kitchenware, furniture, bits of lace and much-coveted decorative and functional items from the past. This well-curated collection features the practical as well as the whimsical objects collectors love to find in out-of-the-way places.

Across the way is Roman Mann’s self-titled showcase for his hand-made cabinetry and fine furniture. “I turn found objects into pieces of sculpture,” says Roman, showing off works that transform old square-head nails and wood knots into thought-provoking collectibles. Roman is a joiner, or master carpenter, who accepts commissions for kitchens, built-ins, cottages and fireplaces as well as artwork. For the shop he sculpts birds with minutely detailed feathers and little wooden Santas with tiny lifelike features and a touch of humour, rustic birdhouses transformed into patio lanterns and a sculpture inspired by his brother’s diving prowess. “All my work revolves around memories of Manitoulin,” says the craftsman. “I’ve been coming to the Island since I was five years old, this has always been home.”

Beside Roman Mann is Oriole Arts Studio and Gallery, a “collaborative” of five women  made up of Ann Beam, Lynda James, Nancy McDermid, erin-blythe reddie, and, full disclosure, this writer, working in pottery, photography, paintings, textile art, ‘naturescapes’ and mixed media. Nancy and erin-blythe began creating together two winters ago in the space that was then Fish Point Studio. “Our dream of having our own studio became real when the space became vacant. Our names were on a list of artists who were in line for a vacancy, and in April this year we were notified that we were at the top of the list. We knew then we would say yes.” They started a search for “resonance,” says erin-blythe, “among the spirits of the artists we thought would be harmonious with ours. We wanted to share our dream.”

Oriole Arts is airy, with windows and a door to the long verandah overlooking the East Bluff of Gore Bay and stocked with pots and bowls, photos and paintings, silk and woven scarves and zen constructions with haiku. “This is a first-class studio,” says Nancy McDermid, “and the architecture of these spaces helps us be more creative. The camaraderie amongst all the artists is invaluable and we are so grateful for the exchange.”

Just across the hall is HY Creates, the working studio and gallery of Heather Young, who, as she explains, works “in all mediums. There’s nothing I’m not interested in, from still life to animal, spiritual, surreal, symbolic and traditional themes. I paint out of my mind’s eye.” Her small and medium-sized canvasses of overcast medieval villages, endearing portraits of sheep, a horse or a donkey are arranged beside a Gothic face or a dozen eggs on the gallery walls, portraying “what she knows intimately,” says Nicole Weppler, “and her paintings are little jewels.”

The third floor of the Harbour Centre is dedicated to the William Purvis Marine Centre, anchored by historian G.I. ‘Buck’ Longhurst’s extensive collection of important marine memorabilia. “Wharf rat, that’s what people call me,” says Mr. Longhurst. “My dad had three charter boats and I took my first trip across Lake Superior at three months.” The historian started collecting and taking pictures in the 1960s; one-third of his collection is now owned privately, one-third was donated to Algoma University College and one-third to the Harbour Centre. “There are 20,000 slides here and 12,000 prints in an archive that people can use in their research.”

In the bright, climate-controlled loft-like room, there are intricate model boats, shipping company histories, lighthouse lenses, paintings, and working parts of boats such as a steam whistle, steering wheel and running lights. There is a display of the 20 books authored by Mr. Longhurst about Great Lakes marine history, for sale or browsing.

Nicole Weppler has been the director of the Gore Bay Museum since 1987, raising funds and overseeing the expansion of the former jailer’s home with an addition of two state-of-the-art galleries, for which the museum won the 2014 Russell K. Cooper Living History Site or Heritage-Based Museum Award given by the Ontario Historical Society. The Gore Bay Harbour Centre is a passion she has worked equally hard to develop. “Artists need to live in a community, to give and receive encouragement. It is very difficult to make a living as an artist, so it is very important to be encouraged to continue and to have affordable space. Artists are necessary for our existence, we cannot live without art, and the town of Gore Bay has made it possible for artists to live with a measure of security. In return, the Harbour Centre has become a place infused with culture that is a showcase for the town.”

“This year is the busiest I remember, in terms of numbers of people who have walked through,” adds Lynne Gerard, echoing her colleagues. “The Harbour Centre is not just a destination, but an experience.”