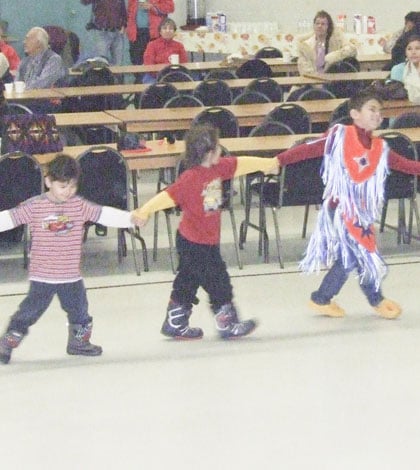 Guided by the dulcet voice of emcee (and drummer) Falcon Migwans and led by regalia-clad dancers including M’Chigeeng artist David Migwans, families joined in a variety of dances to bring in the New Year.

The event gathered visitors from communities across Manitoulin and beyond, a fact referenced by M’Chigeeng Chief Joe Hare as he spoke a few words of greeting and accepted an unscheduled accolade from Mr. Migwans.

Mr. Migwans explained the significance of the bear clan as leaders in the community and how he came to the decision to carve the symbol and present a carving to Chief Hare as an expression of his gratitude for the elder Anishinaabe statesman’s many decades and contributions to public service and his community.

“This is quite a surprise,” said Chief Hare as he hefted the large stone carving. “I certainly didn’t expect anything like this.” Chief Hare noted that he often accepts gifts in his role as chief on behalf of the community and that many of those gifts can be viewed on a large display table at the council chambers.

“I am so delighted to see a young man embrace the culture,” Chief Hare said of Mr. Migwan’s role at the hand drum social. He described the head dancer as “an artist who takes care of himself and who takes care of others in the community. If there were more like him many of the problems facing many of our communities would go away.”

“I will take this gift and display it at the council table for all to see,” said Chief Hare. “Sometimes people don’t understand how things work and how long it can take to make things happen. Maybe this will inspire them to calm down and let them see why things are the way they are.”

Terry Debassige, one of the organizers of this year’s event, delivered words of congratulation to the community. “It is good to see so many strong healthy people here,” he said. “We are sharing our spirit with each other, celebrating what creation has given us. Before we were all one people, we helped each other,” he said. Noting that the divisions of reserve communities did not exist in pre-contact times, the entire Anishinaabek was united before the balkanization brought about through colonialism. “That which was forced upon us has driven us apart,” he said, but noted that the gathering in M’Chigeeng was a testament to the fundamental unity of the nation.

The dancing was followed by a community feast in the early evening.