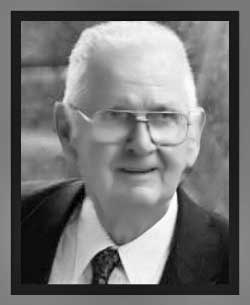 Harold (Hal) Lawrence Kewley, a resident of Little Current, died peacefully at Manitoulin Centennial Manor on Sunday, May 10, 2015 at the age of 85. Born to Gertrude (nee Fitzgerald) and Claude Kewley in North Bay Ontario on March 31, 1930. Husband of 58 years to Marie (nee Omnet) and much loved father to Luanne (Paul Stewart) of Ras Al Khaimah, United Arab Emirates, and Jamie and Bill, both of Bracebridge, Ontario. Proud grandfather “Poppa“ to Evan Kewley, Melissa (Steve Petlichkov), Adam Parrett and Kerry Parrett. Special great-granddad to Bianca, Brooks and Baya Petlichkov. Youngest brother to Keith, Ken (predeceased) Mike (predeceased) Herb (predeceased) and Dan (predeceased). Great friend and brother-in-law to Jack and Jean, Kathy, and Bill (predeceased) all of Little Current. Popular uncle to numerous nieces and nephews. Born in North Bay, Ontario, the youngest of six brothers, Hal grew up in Hamilton and Toronto. Even as a young child Hal showed superior skill in all sports, particularly hockey. At the age of 16 he left home to play Junior “A” hockey with St. Michaels (St. Mike’s) in Toronto. His skills and zest for the sport led him to earn a spot playing right wing for the Ayr Raiders in Ayr, Scotland where he was top scorer for three successive years. Hal played hockey in the European league for several years, most notably in Ayr, Scotland and Bolzano, Italy. A popular player and friend in Bolzano, the hockey arena in Bolzano stills displays his player profile. Upon his return to Canada, in 1956, Hal was working for the Dept. of Parks and Rec in Toronto when he spied an advertisement for a hockey coach in the town of Gore Bay. Not even sure where Manitoulin Island was, Hal applied and was successful in getting the position. For several years he coached and played on the Gore Bay Junior “C” team. It was at this time that he met and married Marie Omnet. During his years on Manitoulin, Hal worked for Bell Canada and Ontario Hydro during the off-season, and got to know the waters and coastline of the Island. After the birth of their first child, Hal and Marie relocated to southern Ontario, Preston/Cambridge where they lived for several years. Ever active, Hal was very involved in Minor Hockey in the Kitchener-Waterloo area. Moving to Bracebridge, Muskoka in 1969, with Marie and their three children, Hal became firmly entrenched in the hockey world in Muskoka. He worked hard to see the Bracebridge Midgets advance to the All Ontario hockey finals, and remained actively involved in Muskoka’s Minor Hockey well into his 60s. As a grandfather, Hal taught all his grandchildren to skate and shoot, and hit balls of all types. Until his early 80s Hal could be found at the Bracebridge Hockey Rink, if not playing and coaching, then keeping an eye on the local up and coming hockey talent. In the late 90s, and retired, Hal and Marie built a second home on family property on the Island. Being able to spend summers on Manitoulin was a much cherished part of Hal’s life. Funeral services will be held on Wednesday, May 13, 2015 at the Island Funeral Home, Little Current at 2 pm. Burial will follow immediately at Mountain View Cemetery. In lieu of flowers, the family would greatly appreciate any donations being made to the Manitoulin Centennial Manor Auxiliary.