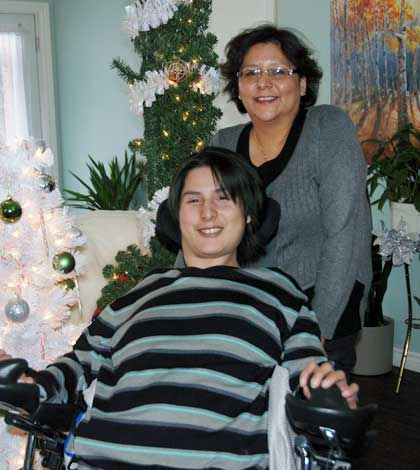 AUNDECK OMNI KANING—Gabe Abotossaway of Aundeck Omni Kaning got some good news last week—news he and his family have been waiting for since Gabe received the life-changing surgery that saw him moved off a ventilator and out of the hospital over one year ago.

On May 21, 2011 while travelling Highway 69, the then-20-year-old was involved in a major car accident that saw him airlifted from the site of the crash with life threatening injuries, including a traumatic spinal cord injury that left Gabe a C4-5 quadriplegic which means he has almost no feeling from his shoulders down.

This injury also left Gabe not able to breathe on his own, needing the use of a ventilator to survive. Ventilators are not the ideal—a foreign object in one’s lungs, the body becomes susceptible to infection, which often leads to pneumonia.

Gabe was fortunate in that he became Canada’s youngest and only resident east of the Rocky Mountains to be a recipient of a NeuRx Diaphragm Pacing System, groundbreaking surgery he received in July of that year that sends an electronic impulse to the diaphragm, causing the lungs to inflate and deflate on their own, without the use of a ventilator. Once it was proven that the device worked for Gabe, and he was breathing ventilator-free for over a month, the determined young man was able to head to rehab in Ottawa, before coming home to Manitoulin.

Last week, Dr. Raymond Onders, the Cleveland-based surgeon who mentored the Health Sciences North surgeons in Sudbury through the NeuRx surgery (due to Health Canada restrictions, the doctor could not perform the surgery himself), contacted the Abotossaway family with the news that Health Canada has approved the NeuRx Diaphragm Pacing System, meaning the family can apply for reimbursement for the $31,000 piece of equipment and will also have everything involving the use of the pacer covered (batteries, specialized bandages and wires, etc.). While they are unsure if they will be reimbursed for the cost of the pacer, they are just pleased that others in Canada in similar positions will now have the opportunity to have the surgery.

“This is good news for everybody who finds themselves in a position like me,” Gabe told The Expositor. “Without it, I’d probably not be here.”

“I think it’s kind of funny; I live on batteries,” Gabe smiles. Special (and expensive) batteries that are made in Israel, his mother adds.

In late November Synapse Biomedical Inc., the maker of the pacer, announced it had received approval from Health Canada for its NeuRx DPS for ventilator-dependent spinal cord injury (SCI) patients who lack voluntary control of their diaphragms. With Health Canada approval, SCI patients throughout Canada can now access this technology that was only previously available to clinical trial participants or through the Medical Devices Special Access Program, a press release from Synapse Biomedical Inc states.

The device is implanted through minimally invasive laparoscopic surgery and provides electrical stimulation of the muscles of the diaphragm, the press release continues. “When stimulated by the NeuRx pacer, the diaphragm contracts, mimicking natural breathing, and allows air to fill the upper and lower parts of the lungs rather than forcing air in with a mechanical ventilator.”

Gabe and his mother Beverly Abotossaway spoke of the kindness of Dr. Onders, who has been in touch with Gabe throughout the process and who has been working closely with the Rick Hansen Foundation to see this approval through.

“Gabe always said since day one, if we couldn’t get the reimbursement, he wanted to champion for others,” Beverly said.

Following this news, Gabe received phone calls for interviews from both the Toronto Star and CBC about his own experience.

Last Christmas, The Expositor spoke with Gabe, who had just moved into his new family home in Aundeck Omni Kaning, a home built especially for his needs.

He reflected on 2013 as a year filled with challenges, numerous urinary tract and lung infections and a couple of hospital stays in Little Current.

The family also made the decision to take Gabe’s care into their own hands, letting go the homecare attendants that were living with the family last year. There were numerous language and cultural barriers that just weren’t a good fit for Gabe’s care, they explained. Beverly is now Gabe’s full-time caregiver, but she is hoping to hire a local homecare person in the New Year.

All of Gabe’s care, from his daily morning routine with personal support workers from Mnaadmodzawin to home visits from Dr. Jeffery to visits to the Manitoulin Health Centre, is done right here on Manitoulin.

“We’re just so fortunate to live on Manitoulin with the services we have,” Beverly said.

“But I do need the extra help—I need to let go of my responsibility and train someone new,” she added. “It’s like watching Gabe grow up from the beginning again. It’s taking a bit longer to be independent, but you’re getting there Gabe,” she said, looking at her son. “Yeah,” he responded softly.

In 2013 Gabe and his family started to go out to eat at some local restaurants that are accessible for his wheelchair, and he went to Hawfest, which he said was disappointing because the music was too loud to communicate (Gabe can’t speak loudly anymore).

He’s rediscovered some of his Xbox role playing games, which a special device ordered from the United States allows him to control with movements from his eyes and head.

The Abotossaway family also welcomed a new, and much-loved, addition to the family. Chewy, the sheep dog.

His goals for the New Year are to work on his physiotherapy to have him in his chair and out of his bed more and more, and to work on the muscle strength in his neck to be able to operate his electric chair.

Gabe is also pleased to report that his pain levels have decreased with time too.

Beverly’s hopes for the future are that Gabe can one day breathe completely on his own, without the use of any devices. The family is always searching the news for the latest in spinal cord technology advances from around the world, always remaining realistic, but hopeful.

For Christmas, Gabe—a world traveller before the accident—has asked for a map of the world so, with the help of his parents, he can clip out photos of himself in the places he’s been and have them placed on the map. He recalled fondly a family trip the US Virgin Islands, one that saw him detained at the Caribbean airport on the way home. He laughed at the thought.

Last year also saw Gabe named a godfather to AJ Fox and Noah Price. “I thought it was a great honour,” Gabe said. “I always wanted to be the Godfather,” he joked.

Gabe’s great wish for the New Year is for more visits from his friends. His door is always open, after lunch, he laughed.

“I just like it if people come, randomly visit,” he said. “It’s nice having people come around—I don’t get many people stopping by.”