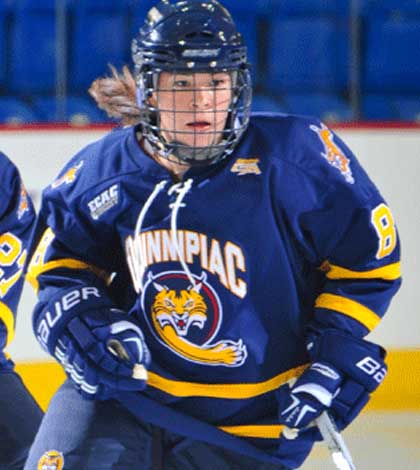 CONNECTICUT—Wikwemikong athlete Kelly Babstock is taking the US college hockey league by storm with her name appearing in Sports Illustrated, being named to the US Women’s National Winter Camp in 2012, starring on her school’s women’s hockey team—the Quinnipiac University Bobcats—and most recently, being named her school’s top female athlete of the month.

The Expositor had the opportunity to speak to the rising hockey star last week during her Christmas break about her hockey career and plans for the future.

“I grew up in Mississauga, but my family is from Wikwemikong and we have a cottage on the Island where we spend lots of time in the summer,” explained Ms. Babstock. “My senior year is going well, fast, but really good. My team is also doing really well, in fact the best in its history.”

The Bobcats are currently at their highest ever NCAA raking of ninth place, assisted greatly by Ms. Babstock’s efforts that have her placed in the top 100 assist mark, in addition to 88 goals in her Bobcat career.

She was also named the Eastern College Athletic Conference’s (ECAC) (which includes all of the Ivy League schools such as Harvard, Princeton and Brown) player of the week, as well as her school’s top female athlete of the month for November.

According to the ECAC stats, Ms. Babstock currently holds the top points and assists tally, being second in the plus/minus with a +20 and third overall in goals with 12.

“I was very honoured and happy to be recognized,” said Ms. Babstock of her recent awards. “I want to keep pushing myself to do my best and keep moving forward.”

Ms. Babstock shared that she got her start in hockey, skating on her dad’s homemade rinks.

“My dad would always make backyard rinks when I was growing up,” said Ms. Babstock. “My dad played junior and major hockey and my brother is an amazing athlete and plays lacrosse for the Calgary Roughnecks. Both of them have really inspired me.”

Though Ms. Babstock originally chose school in the United States over Canada, she told The Expositor that Canada is her home and after she completes university in 2014, she hopes to return and play in the Canadian Women’s Hockey League. (CWHL).

“I want to play in the CWHL when I am done and continue to improve and make the Olympic team,” said the university senior. “I’ve grown so much as a player and as a person and I can’t wait for the new challenges that await.”

Ms. Babstock is a 5’5” forward, and according to the Quinnipiac Bobcat’s website, is on her way “to establishing herself as the greatest women’s hockey player in Quinnipiac history.”