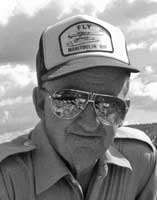 We regretfully announce the death of Robert Howard Wilkinson on September 12, 2013 with friends and family at his side. He is predeceased by parents Annie and Bill Wilkinson, and brothers Autrell and Art Wilkinson. Being the youngest of three brothers, Howard had an unmatched charismatic charm and had manyfemale admirers, but never married. Unselfishly he put family ahead of his own needs and helped run the families tourist camp from the age of 14. The majority of his life was spent on the water guiding for the tourist camp, and looking after people and properties. Howard loved his boats and was an avid fisherman and hunter. In his youth Howard acquired many talents, among them was the gift of musical entertainment. With Kazu and guitar in hand, Howard was a one-man band entertaining visitors, family and friends with brother Autrell playing the washboard. As a senior, Howard was a witty, kind, happy- go lucky man who was “king of the Chinese Checker board”, even at the age of 89. In the twilight of his brother’s life, he lovingly cared for Autrell who suffered 10 years with diabetes. Howard embraced adventure and loved hunting and fishing, which made for many good times with Howard telling stories and sharing memories of his youth on LaCloche and Manitoulin. Some unbelievable highlights include being the first to ride in a pickup truck over the Manitoulin swing bridge while it was still a rail-line; flying under the bridge in float plane; and being struck by lightning multiple times! Howard was a blessed addition to our family, he was always nice to be around, and enjoyed spending times with the honourary grandkids. He was a wonderful grandfather to the Adams family, experienced outdoorsman and loyal friend. Although, our family has been privileged to spend many cherished years with Howard, we trust that he is now at peace and reunited with his family he has loved and missed so much.