by Judith Jones for Wiikwemkoong’s Species at Risk Program

WIIKWEMKOONG – Manitoulin Island is clearly an important area for migrant monarch butterflies on their way to Mexico. Wiikwemkoong Unceded Territory’s (WUT) Species at Risk Program hosted a monarch count from August 23 to September 6, to study the migration. Based on the observations reported, monarchs were widespread, and many hundreds were moving through our area during that time.

A total of 77 sightings were reported from 22 observers across Manitoulin. Most observations were of one or two monarchs, but there were some reports of dozens or even hundreds. Observations were made from Little Current to South Baymouth, from Sheguiandah to Walkhouse Bay near Silver Water.

WUT Species at Risk program coordinator Theodore Flamand saw 80 to 100 flying high over his boat in Wikwemikong Bay August 28, and the same day biologist Judith Jones saw dozens at the South Baymouth marina sitting on the road sucking minerals from the ground and sitting on flowers feeding on nectar.

On August 31, a fisherman reported hundreds flying high across the North Channel near Little Current. During the two-week period, three overnight roosts were reported, in which the observers watched dozens of monarchs swooping in or dropping out of the sky late in the day to rest on tree branches. The information gathered from the count will be submitted to Mission Monarch, an organization that is becoming Canada’s centre for monarch data.

According to monarch researcher Dr. Joe Shorthouse, the monarch migration was a week earlier than last year, possibly due to the warmer temperatures. Dr. Shorthouse had planned to do two public tag and release events, but very few monarchs were around by August 30. He had been expecting the large numbers seen along the south shore would be present through the first week of September. However, not enough monarchs were caught to make a public event worthwhile.

Monarchs are now flying across the United States on their way to the mountains of Central Mexico where they spend the winter roosting in fir trees. In late February they mate and begin to head north again. Most will stop and lay eggs in the southern US, and then the following generation will mature and continue to fly north. A few monarchs do fly all the way from Mexico to Ontario. Monarchs usually arrive back on Manitoulin in the first week of June.

Monarchs are under threat from many factors. In Canada, the most serious are loss of milkweed from herbicide use, increased crop area, and roadside maintenance, raising monarch caterpillars in captivity (a very recent discovery), and breeding them for sale.

From the 1990s to about 2015, increased herbicide uses for herbicide-tolerant crop varieties eliminated a lot of milkweed, the monarchs’ only food plant. Herbicide use has now probably stabilized at a consistent level, but the current trend to increase crops and to convert hay fields and pasture to crops, continues to eliminate milkweed. Roadside maintenance, such as moving, during the breeding season also takes away milkweed.

Very new research has discovered that monarchs raised in captivity (such as caterpillars put in a jar) may lose their ability to orient themselves. They can’t tell which way is south, so they cannot migrate and thus cannot survive the winter. This has been found to be true even of monarchs exposed to sunlight.  The 10 top monarch scientists have put out a letter recommending that monarchs not be captured and released other than just one or two for teaching purposes.

Monarchs can also be bought commercially, often for releases at weddings or memorials. New research has found that commercial monarchs bred in captivity can have genetics very different from wild monarchs. Commercial monarchs have genes like non-migrant populations in California and Florida and may not migrate. When these monarchs are released and mate with wild monarchs, they may introduce non-migratory genes into the wild, and these genes will be passed to future generations.

How can we help the monarchs? Leave some milkweed standing to feed the butterflies. Avoid catching caterpillars to raise, except for one or two to show the kids. Mow the roadsides before early June or after mid-August. If buying butterflies for an event, get a species other than monarchs. Keep watching monarchs and send your information either to  manitoulinmonarchs@yahoo.com (WUT species at risk program) or to mission_monarch.org. 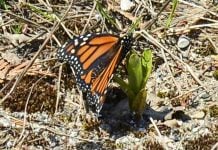