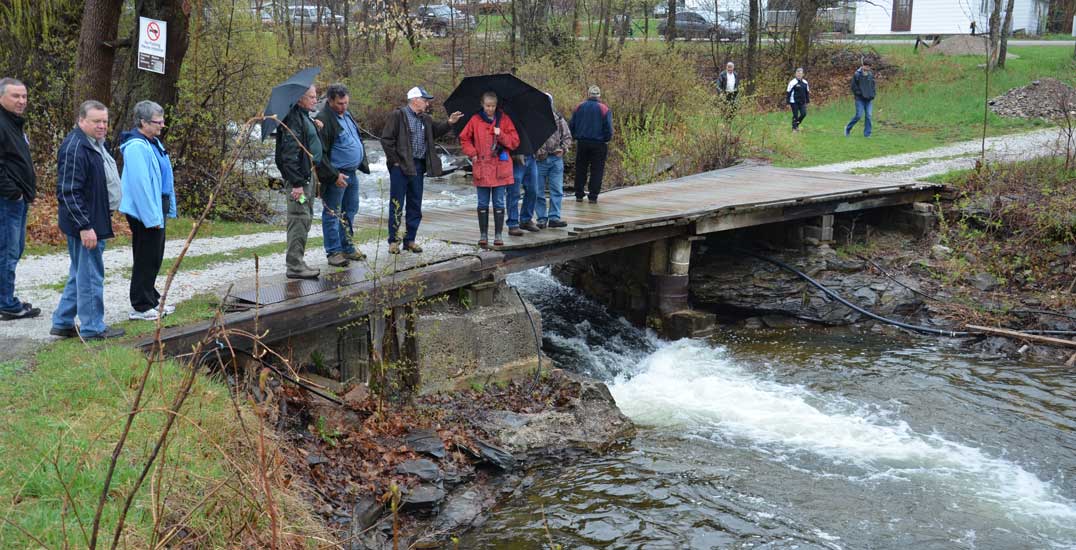 SHEGUIANDAH—The Ontario Federation of Anglers and Hunters (OFAH) Zone D spring meeting at the Sheguiandah Seniors’ Hall on Saturday, May 9 was largely convivial until the issues of commercial fishing in the North Channel and access to Crown land in Northern Ontario came to the fore in the discussions. The meeting opened with delegates from the Zone D clubs reciting the ‘Conservation Pledge.’ “I give my pledge as a Canadian to save and faithfully defend from waste, the natural resources of my country, its air, soil and minerals, its waters, forest and wildlife.”

Mr. Polsky outlined funding that had been approved by the zone, including $2,500 to Manitoulin Streams for stream restoration, $2,600 for the youth trappers course for the purchase of trappers kits and OFAH memberships, $500 for the 24th annual hunters education conference, $1,500 to the United Walleye Club for school micro hatcheries and education programs and another $2,500 to help defray the cost of the club’s shocker boat (a vessel used to harvest walleye to be milked for the hatchery program) and $1,250 to sponsor a hospitality room at the 87th OFAH annual conference.

In his report, Mr. Polsky congratulated the Trailsmen Rod and Gun Club which was the recipient of the Mary Pickford Award. The Mary Pickford Award is one of the Federation’s oldest and most renowned awards and is presented to the OFAH club judged to have made the most outstanding contribution to conservation in 2014. Mr. Polsky also congratulated the Zone D spring meeting hosts, the Manitoulin Streams Improvement Association, for winning the Minister’s Award for Environmental Excellence for 2013.

There was some question as to why the OFAH does not make a great deal of media splash in its publications about these accomplishments, with a suggestion that most of the information in Hunter and Angler magazine is southern Ontario oriented and focussed on ‘how to’ tips and tricks for hunting type of articles.

Mr. DeMille noted that the magazine’s main content delivers what its readers want in its pages, but that there is a section for highlighting club activities. “We depend a lot on our members to supply us with information and articles on that,” he said. Mr. DeMille made a commitment to try and deliver more information focussed on Northern Ontario and its activities.

During reports from the zone’s membership committee it was learned that there has been a slight decrease in memberships over the past year, but that there are plans to embark on a membership drive this year. “We have to realize that if we want funding for new projects we need to increase memberships. It is very important that we recruit people,” said Mr. Polsky. “Unless you want to be sitting at a table outside the grocery store doing fundraising.”

United Walleye Club (UWC) chair Rolly Frappier reported fantastic success with its work, with seven to eight million eggs being harvested for hatchery programs. He highlighted a number of very successful mini-hatchery programs taking place in schools including reserve schools on local First Nations (M’Chigeeng, Whitefish River and Sagamok). “It has been a huge success,” said Ms. Frappier. “It is such a delight to work in these classrooms doing this work.”

Mr. Frappier showed a very short video of the beating heart of a walleye fry. “I call this the heartbeat of the future,” he said. Mr. Frappier said that the club was “taking a different route” with the education program that some members might not agree with, “but it is working.”

A lively discussion was generated when one member questioned the “change in attitude” of First Nations members in harvesting spawning walleye. Mr. Frappier cautioned against painting everyone with the same brush over the issue. First Nations members are generally very well educated about conservation efforts and needs and tend to be very supportive of those efforts.

“When it comes to walleye stocking, it is going to be First Nations that are the lead in that,” predicted Mr. Frappier, a projection in which he was backed up by retired MNR biologist and conservation activist Bob Florean.

“You have got to start a dialogue,” he noted. “You don’t get anywhere fighting. It is a joy to go into the schools.” Approaching First Nation schools is “like cold calls,” continued Mr. Frappier. “They don’t know me, but they have been very receptive,” he added, noting that there are many similarities in the goals of both groups.

“They want to preserve the land for future generations,” said Mr. Frappier. “Isn’t that what you want? Well that is what they want.”

Another issue regarding First Nations surfaced when discussion took place about commercial fishing of Lake Nipissing. A number of abandoned nets led to charges being laid, with the MNRF having to approach the local band in order to carry out the charges as the commercial fishing licence had been issued by them, but there is little communication on the number of commercial fisherman on the lake.

Mr. Frappier and Mr. Florean countered that the sport fishing industry provides far more employment in the North, with a comparison ranging far in excess of a 10 to one ratio. “A lot of these areas are depressed because of the lack of fishing,” asserted Mr. Frappier. “We have to get rid of commercial fishing, I don’t care if it is First Nations or non. There are millions of dollars being lost. It is a major, major problem.”

Mr. Green pointed out that fisheries regulations carry far more of the blame, pointing to fines if the commercial fishermen do not take out the cull fish (such as suckers) adding that “I don’t think you should jump all over them like you are, they create jobs.”

“Like it or not it is reality,” retorted Mr. Frappier.

“Maybe it is reality, but…” replied Mr. Green before the chair intervened to redirect discussion.

A report on the recent deer management meeting was presented. That meeting has been reported on in previous editions of the Recorder in detail, but the key information is that the previous severe winters did not have as severe an impact on the herds as had been originally feared.

The lack of sound data on which to base deer tag allocations and assessment of herds was discussed, with current systems being identified as largely anecdotal, but suggestions that the OFAH get involved in primary data collection, through drones or helicopter surveys proved problematic. On the one hand OFAH officials said they were concerned that they would be letting the government off the hook if they took up the slack and on the other the concern that such surveys were prohibitively expensive for the OFAH to undertake.

Issues over the differences in canopy makeup were also expressed, particularly on Manitoulin where the cover tends to be coniferous (evergreen) thereby hiding what is on the ground more thoroughly in winter than in the US, where the cover is more likely to be made up of deciduous trees that lose their leaves in winter.

Mr. Florean made the observation that “deer are an important resource here on Manitoulin.” He pointed out that, if one were to include the value of properties owned on the Island for simply for the purpose of hunting deer, “it is a $300 million industry.”

One troubling issue brought up at the meeting was the lack of media exposure that the use of defoliant chemicals receives. A number of members alleged that the chemicals were not only killing off the vegetation, they were impacting the number of moose as well.

“Sure it doesn’t kill the moose,” said one member, “but it kills what the moose eat. The MNR is spraying poison in our forests.”

“We are so passionate about what we do,” said Mr. Polsky, “but whether we are going to win or lose (the conservation battle) is going to be among the general public. We need to focus on the bigger picture.”

Other issues discussed included the issue of elk herds and their depletion due to First Nations harvesting. It was determined that although the First Nations communities had come on board with not harvesting the animals until target population had been met, depredations by the herds on local farmers’ crops had led to landowners requesting that hunters from those communities come onto their lands to hunt the animals.

The discussion centred on two key mistakes made in the program: not compensating farmers for crop losses and feeding the original seed animals with round bales so they see it as food.

“The local First Nation was on board with not going to harvest until the population targets were met,” said Mr. Ryckman. “They were until the local landowners invited them in because they were suffering damage. The MNRF tried to do something, but they were told they could not, that set the precedent.”

Frustration was expressed that any attempts to highlight the issue invariably led to accusations of racism in the court of public opinion. “They don’t even read what we put out there,” noted Mr. DeMille, who had authored a paper which he said did not mention the word ‘Native.’ “They didn’t even read what we put out there,” he said. “We got beat up pretty badly by non-Natives.”

Following lunch and reports from Zone D clubs, the delegates braved the steady drizzle on Saturday to view the work done on Bass Creek by the award-winning Manitoulin Streams Improvement Association.