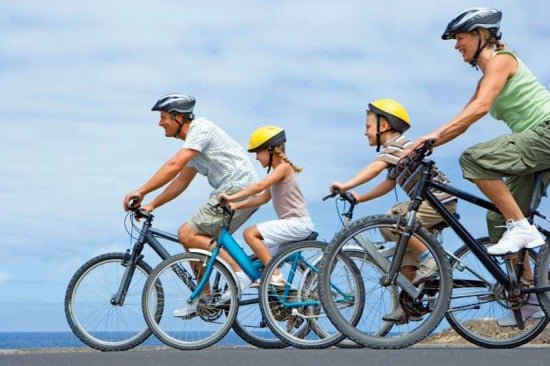 The Meeker family of Big Lake have been staying active while walking, biking and dog wrangling almost every day! Congratulations to parents Zac and Terri and children Nate, Ty, Lizzie and Victoria who keep dogs Darcy, Winston and Emma well behaved. A special shout out to Ty who just discovered the added freedom of a bike without training wheels. Keep it going, guys!

The Wiikwemkoong Anglers have been growing in numbers of late and have been holding very successful fishing derbies. I recently caught one of the organizers, Santanna Eshkawkogan, who was actually not fishing, to get some more information about their group and derbies. She, along with group founders Angela Peltier, Lorne Agawa, Quinton and Kendra Recollect, Dustin Peltier and Galen Trudeau, created the collective as “a way for us local anglers to come together to plan tournaments for others in our community and now virtually we’re able to allow others outside Wiikwemkoong to participate.”

“We’re trying to sustain the life cycle of these fish, so all of our tournaments are catch and release format,” she said. “All our fish are put back for future generations. Our page allows us to share tips for new fishermen/women. To also share favourite lures, fishing spots if you’re so generous and of course to share memories.”

“Recently we’ve had a jump in female anglers,” Santanna adds. “This past pike derby we had 18 female anglers. Very nice to see a jump from five in previous years.”

The virtual pike derby that took place this past weekend saw an incredible 80 paid participants including three youths. The format was a two-fish limit with a combined total length being tallied to determine the winners. Participants had to post a video of their fish being measured, showing the time of day, say or display the tournament code and then the video must end with the fish being released on its merry way.

There was substantial prize money for the top three ($2,400, $1,700 and $700!) and the group also listed honorable mentions for fourth to sixth places. In first place was Curtis Lammi with an incredible 79 inches for his two pike! Second place went to Justin Debassige with 75” and Jeff Bailey was awarded $700 for his 66 1/8” total. Rounding out the top-six placings were Crystal Lynn (63.5”) in fourth, fifth was Zozep Shawana (62”) and finally in sixth place was Angela Vaillancourt, 61.25”

Thanks to the overwhelming success of this weekend’s tournament the group has added another derby into their already busy summer schedule. On June 5 they will host another pike tournament with the same format and for just a $60 per angler fee. Organizers are encouraging people to make sure they follow all the simple rules to keep the competition fair for everyone. The videos can be recorded from 7 am to 6 pm and you have until 9 pm to upload your videos. Their poster also stresses that people practice social distancing, especially at the boat launches. For more information contact Lorne at 705-665-8139 or Angela at 705-282-7384.

I was saddened to learn of the passing of Blair Graham of Gore Bay. Over many years of watching Manitoulin sporting events, I was always amazed at the number of times that Blair would be there. Of course he was always present when his son, Mason was competing in anything, but even after Mason was sidelined with injuries, Blair was still there.

He could be found at almost all the Manitoulin elementary school championships, especially track and field and cross country that were held in Gore Bay, but he would often be at other events around the Island, sending out his support. When the Manitoulin Wild and the Manitoulin Islanders were at their lowest of lows, Blair was always in the stands, backing the teams. He was always up for a chat and had wise insights on whatever was the event of the day. You will be missed, Blair.

Press Release - June 18, 2021
On June 21 Wikwemikong Tourism will be launching a new website at www.wikytours.com to promote their Indigenous Tourism experiences on Manitoulin Island and in...