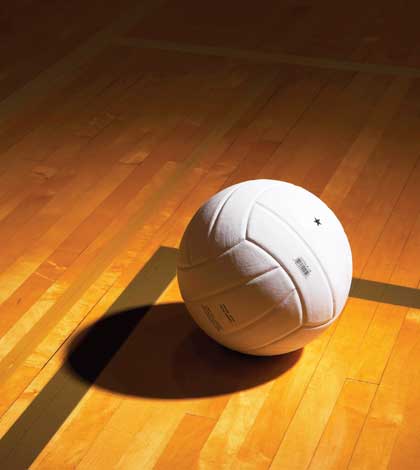 The annual Manitoulin Elementary Volleyball Championships took place last Thursday in Little Current for the girls and in Wikwemikong for the guys.

In the girls’ event Pontiac and Charles C. McLean were tied with 4 and 1 records after the round robin. Pontiac, however, won the trophy as they had previously beat CCM in their head to head match. Congratulations as well to Gore Bay who finished in second place and Assiginack who took the bronze.

On the guys’ side there was a real battle all day between the top three teams of Pontiac, Little Current and Mindemoya. After every school played two matches against every other team, Central Manitoulin and Pontiac were deadlocked in first place, both with 8 and 2 records. Since they had split their matches in head to head action, the tiebreak procedure called for a single 15 point match with the winner needing to win by 2 points. CMPS worked their way up to a strong lead but Pontiac stayed calm and chipped away at the gap. There were many edge-of-your-seat rallies with very few errors. Finally, with the game tied at 13 each, CMPS picked up the last pair of points to win their first ever championship in the history of the very old trophy.

In the MMHA Spotlight this week are the Mindemoya Thunder Bantams. This youngish team has been working real hard in the early part of this season. Even over the short number of games so far it is great to see such improvement. They are taking real strides in making use of the talents of everyone, getting the puck moving between teammates and setting up some great plays. Keep working hard team!

The MSS Mustang boys’ hockey team was back on the road this past weekend to the Christmas Freezeout Tournament in North York. The coaches were really impressed by the great efforts of the guys despite not moving on to the finals. The ‘black and gold’ continues to play some amazing team defense and always put themselves in the position to win against any team with a lot of heart.

In their four games down south, the Mustangs held some high powered teams to one and two goal games to maintain a very impressive, even Goals For/Goals Against record of 7 and 7. They beat Frontenac 3-1 in their opener and tied Westmount Hilltop 1-1 on Thursday. On Friday they tied Peninsula Shores 2-2 and then dropped a close 3 to 1 decision against Algonquin. With so many teams competing, it was the tie-breaking formula that sent the guys back to Manitoulin, but with their heads held high.

The team is on the road today to play the SDSSA leading St. Charles Cardinals. Keep up the good work guys!

Sometimes as I write about the sporting exploits by the often younger set of our community, the adults can get missed. Although organized sports have their own rewards, many of their benefits are geared to the young. However, there are still the odd pockets of weekly broomball games, veteran shinny and 6-end curling matches out there that I would like to hear about. There are also many dedicated personal fitness aficionados that quietly go about their own regimen that can be a source of inspiration to others. So, if you think you or someone you know would not suffer any extreme embarrassment to see their accomplishments mentioned here, please pass them along to the contact destination of your choice, below. Thanks.