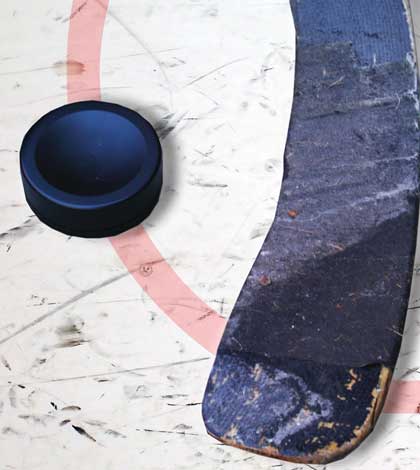 I have missed reporting on a few of our 13 and 14 year old bantams who are spending a lot of time this winter off of Manitoulin playing AAA hockey. Alex Smith, who has always committed to the huge weekly commute time, is living in Sudbury this season and has a bit more spare time. Although, the young Gore Bay expat is not sitting around playing video games. Among other things, he is spending time playing another sport, having made the Lo Ellen Knights basketball team.

As far as his hockey is concerned, Alex had a rough season last year due a serious knee injury. After surgery, last spring, Alex worked hard during his rehabilitation, including an intensive on and off ice training program at the renowned Shattuck-St. Mary’s in Minnesota this past summer.

His Nickel City Sons team is leading the NOHA AAA Major Bantam League with a dominant, 21-5-4 record. Individually, Alex is currently 9th in the league point stats with 31 points in 30 games! The team is in the Toronto Marlies Tournament over the holidays and the International Silver Stick Tournament at Port Huron in January. As of press time, the Sons have split their games in the prestigious tournament. They lost one to Guelph and then beat a Connecticut squad. In the long-term the team is shooting for their season goal of finishing the season with a league title and a berth to the Provincial Championships. Good luck Alex!

Catching up with some of the other Island AAA Bantams, and some direct competition with the Sons, are the Sudbury Wolves’ Bantams. There are a number of important Manitoulin players skating for the Wolves. Tanner Webkamigad is a powerful defenseman who has 9 points in his 29 matches. Gore Bay’s Parker Dickinson has had a shorter season but is always contributing with his high energy play. Rounding out the trio of locals is Gregory Trudeau-Paquet who is always dangerous around the net and has 20 points in his 30 games.

The annual Little Current Lions Club Winterfest Tournament is coming up at the end of the month and they usually fill their roster for the Sportsman Tournament pretty quickly. At this point they do have a couple of openings for one more women’s team and one more oldtimers’ (50 plus) squad. Fortunately, or unfortunately depending on your position, organizers have replaced the 35ers with a women’s division this year. Hopefully there will be a lot less drama?! The big weekend goes from January 31 to February 2 at the NEMI Recreation Centre. Fees are $450 per team, with proceeds to the Little Current Lions Club. If your squad wants to get in the event contacts are Bruce Burnett at 705-368-3163 or email bbruce_52@yahoo.ca or Aaron Case at 705-368-3461, mail him at aaron@manitoulin.ca

The Espanola Rivermen have been a real force during the first half of the NOJHL season. The newly minted Junior A squad is currently in third place in the 8-team league. After 33 games, the team is in a strong position with its 20 wins and 13 loss record. Local skater Nevada Waindubence is affiliated with the team and has a couple of points in his six games with the team. The Rivermen play at home this Friday, January 10 against their north shore rival Elliot Lake Bobcats.

Ever want to float over the snow like the rabbits around here? If you want to try it in a controlled environment, how about groomed trails even? Gordons’ Park is open this winter and they have turned their hiking trails into snowshoe trails. They are open Saturdays and Sundays from 10 am to 4 pm, and other times by appointment. They are also open for Guided Moonlight Snowshoes Excursions, held under the full moon in January, February, and March. Gordon’s Park is on Highway 6 close to 542.

As we enter a new year and all the promises of a fresh slate, I would like to wish everyone the very best this year in their own health. Hopefully you can make even a small improvement in your fitness level as study after study extols the benefits. Cheers.