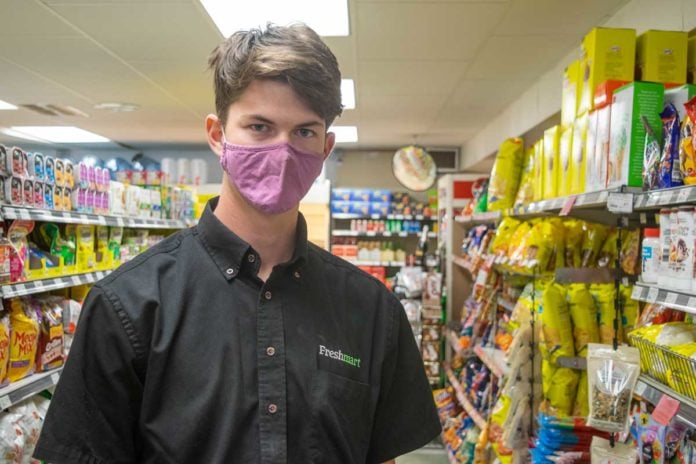 Manitowaning’s Samuel Von Clayton has been working at the town’s Freshmart grocery store for six months, having completed the daunting task of finding a job during a pandemic while he takes a year off after graduating high school.

“I didn’t know if I was going to get a job at all, but I hoped for the best,” said Mr. Von Clayton.

He hired on at Valu Mart in Little Current but his manager soon let him know about an opening at his hometown’s Manitowaning Freshmart.

The grocery store is a launchpad for Mr. Von Clayton while he plans for his future. His goal is to become a welder in the Canadian Forces.

“I don’t have any family history in the military or even in welding; this is just something I’ve really wanted to do,” said Mr. Von Clayton, who completed four years in the Manitoulin Navy League Sea Cadets and ended as a petty officer, second class.

He found his passion for welding through his Manitoulin Secondary School education.

“I took a ton of hands-on courses like woodworking and auto repair and I got introduced to welding in my fabrication technology class,” he said.

For a young, recent high school graduate who is saving up to start his adult life and purchase a modest first car (“just something that runs, can go on the highway and is good on gas,” he adds with a laugh), being able to find work so close to home was a blessing—one that was only possible because of people who shop locally.

“This job has given me a good purpose rather than staying at home,” he said. “And it helps with safety and security and keeping the Island safe because you know people shopping here aren’t going away to buy things.”

Please remember that when you shop locally, you’re supporting friends and neighbours like Samuel Von Clayton at Manitowaning Freshmart.