“I do snowmachine drag races with my granddaughter off-Island,” said organizer Rob Cranston. “We have a lot of fun at them and I wanted to organize something locally for youth on the Island to do in the winter.”

A fresh powder of snow made favourable conditions for Saturday’s races and many racers and spectators came out to enjoy the inaugural event.

“I would like to thank the Manitoulin Island Dirt Riders Association volunteers and Robert Cranston for putting on the Manitoulin Snow Drags and asking Ralf Island Truck Parts to host it,” said Ralf Island Truck Part owner Renee Cranston. “For being the first one, it was a great success. It was amazing to see all the participants and spectators who came out to watch a great day of racing. Thank you to everyone that raced and came out to watch.”

“I was really happy with how the event turned out,” said Mr. Cranston. “We will be holding another one (event) on Saturday, March 3 starting at 10:30 am. I hope more young people are able to come out and we are also hoping to see more classic sleds.” 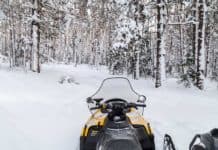 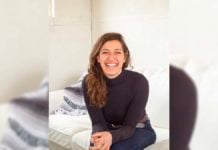