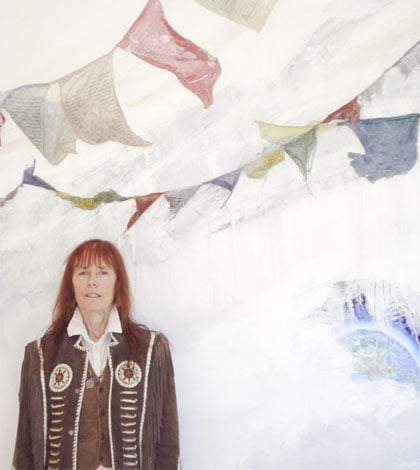 The innovative and intuitive multi-media artist Ann Beam, working out of her studio/gallery in M’Chigeeng, has created iconic images that call upon feelings close to the heart.

‘The heart of the art’ is the logo for the Neon Raven Art Gallery, reflecting the artist’s strong belief that creativity flows from the heart to art and then to life in general.

Many of her works reflect this belief that can be seen in her subject matter ranging from Manitoulin Island imagery to a larger view of the world.

“The Island has been fueling the subject matter of my art for a few years now,” Ms. Beam explained, adding that the waterfalls, cranes and horses figure prominently in her work.

“People are coming to the Island to connect with the natural world and I create images and symbols of that world on an archetypal level.”

The artist welcomes people to her gallery personally and enjoys finding out what inspires them.

Ms. Beam opened the Neon Raven art gallery in 2002. It had previously served as a guesthouse that she had built along with her late husband Carl Beam. The gallery represented the work of both artists along with that of their daughter Anong Migwans Beam.

The gallery was expanded in 2008 allowing for the exhibition of large-scale works along with a variety of studies and smaller artworks produced by Ms. Beam.

“This gallery has afforded me a wonderful chance for development,” Ms. Beam said, referring to the expansive wall space that she has filled with monumental works of art.

Using corrugated cardboard, found objects and birch bark as a medium, this is the latest in several decades’ worth of creative endeavors that have also included hand-built smoke fired pottery and the process of photo transfers.

Her latest show entitled ‘The Engine Room’ is on display at the Tom Thomson Art Gallery in Owen Sound until mid-January and features her corrugated works.

“I’ve embraced the familiarity of corrugated cardboard and taken the creative leap to do something with it,” Ms. Beam explained.

The pieces of cardboard are chosen for their informal nature, their texture and for the messages stamped onto them.

“There are signs, glyphs and arrows on the cardboard I can use and I like juxtaposing my own images with the messages on the boxes,” the artist said.

An example of such an artwork is ‘Do not drop’ in which the words stamped on a box meant for delivering a delicate object, hover over an image of the earth.

The subject matter of the earth has been a prominent theme for the artist throughout her career.

“I’ve been in love with the beautiful blue aura of Earth for many years now,” she stated, noting she is excited to be starting her next Earth image, which will be created on 9 foot by 16 foot panels covering one entire wall.

Another subject important to Ms. Beam’s evolution as an artist is that of the horse.

“The archetypal image of the horse was in my heart,” she said describing how her interest in horses as a symbol developed after she spent time helping a friend with a horse named Mystery. She has since purchased Mystery and the horse is featured in many of her works.

This winter Ms. Beam plans to offer workshops at the Neon Raven alongside preparing for her next show.

The exhibition entitled ‘Express Wagon’ opens on January 24 simultaneously at the La Galerie du Nouvel-Ontario and the Fromagerie Elgin in Sudbury and continues until March 1.

For further information contact Ms. Beam at neonravenartgallery.com. The Neon Raven Art Gallery is located at 53 Corbiere Road in M’Chigeeng.