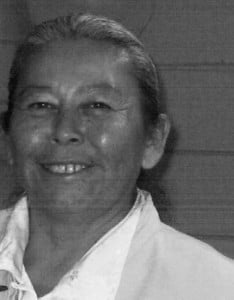 In loving memory of Rubina Bondy who died suddenly on Saturday, February 4, 2012 at the age of 57 years. She was born in Wikwemikong, daughter of the late Jerry and Josephine (Mejaki) Bondy. Loving mother and best friend to her children: Ursula (Neil) of Wikwemikong, Blair (Sunny) of Minnesota and Alex of Minnesota. Predeceased by daughter Tammy. Rubina will be missed by her grandchildren Larrisa, Vince, Tamara, Coltin, Tristin, Amia and Evangelista. Dear sister of Bernadette (predeceased), (Big John) of North Bay, Harvey (Sharon) of Manitowaning, Joseph of Wikwemikong, Paul (predeceased), (Sarah) of Victoria Harbour, Julia (Terry) of Rutherglen and Rhonda (Steve) of Wikwemikong. Predeceased by baby siblings Archie, Stephen and Ursula. She will be missed dearly by her special niece and Best Friend Lorraine. Survived by Aunts Rita Recollet and Teresa Cormack and Uncle Theodore Bondy. She will be missed by many friends and relatives. Rubina had a variety of interests, including making blankets and beading. She enjoyed Facebook, and keeping track of friends and relatives. One of her greatest joys was watching her grandchildren playing hockey and other sports. Rubina was a strong believer and follower of the Anishinabeh way of life. In her life, she had done a lot of traveling and has helped many people. She will be missed by her Sundance and extended family. Rubina was a loving woman with lots to share. Her teachings will be remembered and the memories will be cherished. She has gone to the Spirit World and is dancing with the ones gone before her. She is now reunited with her soul mate Herman Hapa. Ga-Zaagin Baa-Maa-Pii. Friends and relatives called at the Rabbit Island Community Centre after 1 pm on Monday, February 6, 2012 until the time of a Traditional Funeral Service on Wednesday, February 8, 2012 at 11 am. Interment in Wikwemikong Cemetery. Online condolences may be left at www.culginfuneralhome.ca. Culgin Funeral Home, Gore Bay, 705-282-2270.