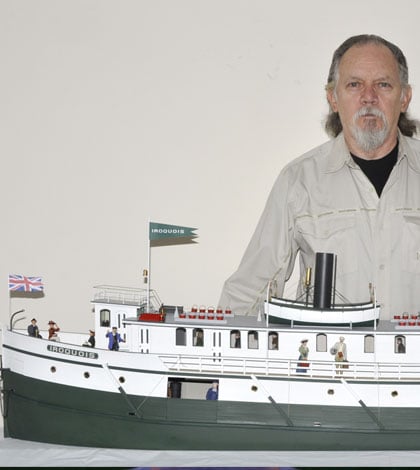 The Iroquois was a small wooden steamer built from the hull of the John J. Long in 1902. The steamer was built for the Eastern Manitoulin Royal Mail Steamship Line owned by T.C. Sims of Little Current. When rebuilt, the steamer had a length of 112 feet and a 20-foot beam.

When the Iroquois entered service she carried the mail, passengers and freight from Cutler to eastern Manitoulin Island communities. On summer weekends she made cruises to McGregor Bay and Killarney.

Her various trips went well without any major incidents. But on October 24, 1908, while bound from Little Current to Cutler she ran aground on a shoal 10 miles northeast of Spanish Mills, in the North Channel. She had been running in thick smoke from forest fires in the areas. When the steamer smashed on West Rock, she caught fire from an overturned stove. The fire could not be brought under control. The Iroquois had whistled for help and a rafting tug dropped its boom and steamed through the smoke and rescued all 17 passengers and a crew of five. There was no loss of life. Shortly after she was abandoned, she sank out of sight.

Sometime later the Iroquois was replaced by the much larger steamship, the Bon Ami.

A couple of summers ago while I was visiting the Assiginack Museum in Manitowaning, curator Jeanette Allan showed me a photo of the Iroquois at the Manitowaning dock. I was in awe. I immediately fell in love with the look and the lines of that graceful ship. She had so much charm and character. Weeks later I located more photos of her and researched the history of this beautiful little wooden steamer. Back then, I did not realize the importance this steamship had on the lives of the individuals that travelled to and from the Island. But for over six years, before the trains, trucks and automobiles arrived she carried passengers and freight items of every description to and from the Manitoulin Island.

I wondered at that time could I build a model that would capture the looks and beauty I saw in that old black and white photo.

On February 18, 2013 I began construction on a 1/24th scale model of the steamship Iroquois once owned by T.C. Sims of Little Current. I had built smaller 1/87th scale models before but hadn’t built a model of this size. Since I was unable to find scale drawings or diagrams of this vessel I used a photograph of the Iroquois that I had obtained from the Assiginack Museum. My eldest son Jeremy took this photograph, and enlarged it to 1/24th size of the original 112 foot long Iroquois. It resulted in a model length of just over 56 inches. Then we printed off several enlargements and I used these as the basis for the hull, cabins, windows, doors and every other detail on the ship.

The model has a pine board bottom, a strip wood frame, and cardboard sides, deck and roof. I glued on scale boards 1/16” thick by 1/4” in width over the cardboard hull, wheelhouse and cabin sides to resemble the wood planks used to build the real Iroquois steamship. Brass rods and tubing were used for the wheelhouse railing, ladder, smokestack, whistle, cook-stove chimney, bowsprit, lifeboat davits, anchor davit and flagpoles. The ships steering wheel, fire pails, brass bell, block and tackle items, navigation lanterns, brass portholes, anchors, anchor chains and metal cat holes were purchased at various hobby supply stores. The windows are made from clear styrene. The Victorian figures are made by Preiser of Germany. Jeremy used his computer skills to make the various flags and name boards on my model.

After nine months of overcoming various obstacles and challenges, I completed the model on November 24, 2013. I enjoyed every minute that I spent working on her.

When I told my wife Ann that I had finished the model, she looked at me with worried eyes and said, “Well, now what are you going to do?”

EDITOR’S NOTE: Keith Hopkin, originally from Spring Bay, is a railway, and now ship, enthusiast with a special interest in the rail as it pertained to Manitoulin and area.