EVANSVILLE—Joseph Maxwell just keeps setting the bar higher in every competition he takes part in.

Mr. Maxwell of Evansville brought home two gold medals as a member of Team Ontario from the Royal Canadian Legion National track and field championships held in Langley, British Columbia this past week.

“Joseph did very well,” said his proud father Steve, on Tuesday. “He had a good trip, getting two gold medals and setting a new Legion National record in the under 18 category.”

In the discus, Mr. Maxwell took the gold with a throw of 52.97 metres, using a 1.45 kilogram disc. And in the shot put, his shot was 19.52 metres (using a 5 kilogram shot put), and breaking the previous national record by about half a metre.

As reported earlier this summer, Mr. Maxwell had also won two gold medals in the provincial competition and set a new provincial record in shot put, entering the nationals with a rank of fifth in the world in shot put for those under the age of 18. 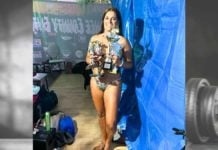 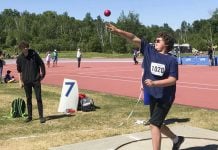