﻿EVANSVILLE—An Evansville man rode his bicycle in the 7 Days in May ride to beat pancreatic cancer, keeping in memory a local man who passed away late last year.

“I wanted to ride in memory of Moe (Marois) who passed on from pancreatic cancer,” said Peter Carter. “Everyone who took part in the ride makes it a personal ride. I know Dan (Marois) and I was riding in memory of Moe, his brother.”

“It was a very moving ride to be part of,” said Mr. Carter. He explained the pancreatic cancer Seven Days in May is a 750 mile ride, over 100 miles per day, through southern Ontario. There were 30 people who took part in the 11th annual ride this year. “Gord Townley and his family spearheaded this ride and, over 11 years, $1.3 million has been raised, including $300,000 this year and every nickel that is raised goes to pancreatic cancer research.”

Mr. Carter said, “I had first heard about this ride around Christmastime and I immediately put my name forward to take part. I was accepted to participate in the ride. Some people who participate ride for one or two days, closer to their home, but 30 of us rode each of the seven days.”

“We had some days riding that the weather was really hot and some days where it was really cold, and it was windy in the Bruce Peninsula,” said Mr. Carter.

“It was a very moving ride to be part of,” stated Mr. Carter. “It was an invigorating ride with everyone having a common goal, putting their hearts and souls into it, riding for a great cause.” He acknowledged that until he did more research about pancreatic cancer, “I didn’t know the mortality rate for people who get pancreatic cancer is as bad as it is. Ninety-two percent of pancreatic cancer patients pass on, and it is a very painful disease.”

“The Townley family knows all of the riders,” said Mr. Carter.

The bicycling will continue this summer for Mr. Carter. “I will be taking part in a cross-Canada ride later this month,” he told The Expositor. “I will be one of 20 bicyclists taking part in the Tour Du Canada. We will be starting June 22.” Riders will travel from Vancouver, British Columbia, through B.C. and east, eventually visiting Manitoulin Island on August 3-4, then overnight and south to Tottenham. Eventually the riders will end up in Mr. Carter’s hometown of St. John’s Newfoundland on September 2.

“This is the 25th annual ride this year,” said Mr. Carter. This cross-Canada ride is something Mr. Carter has always wanted to take part in. “Life’s too short, and this ride is something I’ve always wanted to do. It will be challenging to ride 85 miles per day, but I am certainly looking forward to it. Bicycling is so relaxing and soothing for me. For many years I’ve solved issues at work, for instance, by bicycling.”

Mr. Carter said the annual Gore Bay Rotary Ride will be taking place on August 13. “I will have to ride virtually this year,” he said. “The Rotary Ride should have over 100 people taking part with funds raised going to the food banks.” 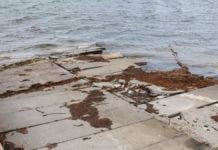