MANITOULIN—This is the story of a young woman who has a lot of stories left to tell. And that is a great thing for everyone else.

Savannah Nahwegahbow is a rising voice who wants to make a difference. As we enter into the most serious and important conversation this country has ever had, Ms. Nahwegahbow feels fortunate to have an opportunity to help frame a positive path forward.

As soon as she’s done napping, that is.

About an hour after our scheduled phone call was supposed to start, she texted me from Sudbury, where she had been working on the show ‘Letterkenny.’ “I’m so sorry, but I had a really long day yesterday, and I just woke up from a nap. I’m free the rest of the day, though, and have no plans for anymore naps.”

Honesty. It is the greatest asset a storyteller can have, but when I tell Ms. Nahwegahbow that she says her mother, Irene, is always telling her she is too honest with everybody. Not a fault—being true to yourself and your voice is the only way that you can authentically connect with your audience as a filmmaker. The human side of the storyteller—the stuff that you learn before you decide to be a storyteller—is just as important as the script, the camera and the actors.

There isn’t a textbook that can show you everything you need in order to tell a good story, and with that in mind, Ms. Nahwegahbow decided to attend film school at Fanshawe College in London, Ontario. It was there that she learned the tools of the trade, and medium of film.

“Yeah, we didn’t have any textbooks in the program, but there was a lot of hands-on learning,” she explains. “Cameras, editing. I love being behind the camera, even though I’m not very good at it.” She adds, laughing, “And I wasn’t all that keen on editing in the beginning, but I love editing, too. To be able to put all the pieces together, and finally put what’s in my head down onto the screen.”

While in college, she also spent time at Weengushk Film Institute in M’Chigeeng at a time when they were working on ‘Moose River Crossing.’ While she was able to learn a lot, and make some great connections, she’s hoping that she can help build the Manitoulin film community because she knows how many great storytellers there are on the Island.

Putting the pieces together is what a good storyteller does, whether you are writing a novel, making a movie or telling a joke at a cocktail party. One of the pieces that brought Ms. Nahwegahbow to her career is growing up with a family that loved watching movies together and quoting lines to each other. It was in the family room, enjoying movies that made her realize the power of film to transport the audience to a different place.

“I think the way I always looked at it was, movies took me out of my head and into my own little world,” Ms. Nahwegahbow says. “From there, I thought ‘wouldn’t it be so cool to work on these things that take people outside of their own little world even just for a few hours’.”

As far as films can take you out of your own world, the process of making a film is often inseparable from the journey of the filmmaker. The stories they tell inform how, and often why, they tell their next stories. Ms. Nahwegahbow’s most personal piece so far is a beautiful slice of humanity, borne out of a horrible tragedy. In 2011, her cousin Gabriel Abotossaway was involved in a devastating car accident that left the then 20-year-old a quadriplegic. In the documentary ‘Gabriel: By God’s Grace,’ the young filmmaker tells a story of the human spirt, the strength of family, and the resilience of Gabe’s soul when his body doesn’t work like it used to. Gabe and Savannah are more like siblings than cousins, and she’s come to realize that Gabe’s story was a traumatic experience for her, too. She understands that this trauma is a part of what makes her who she is. Putting the pieces together, like good a storyteller does. Her humanity and honesty will help her tell stories the way they should be told.

“I’m someone who has a really open mind,” Ms. Nahwegahbow continues. “I am able to see things from different perspectives when I make decisions. I remember seeing people who work in film being interviewed, and they were upset that they were always getting asked about their background, and people of non-race weren’t. I understand that, but at the same time, for me, I look at it as I have a chance to educate—they could be asking because they aren’t educated. This is a chance to educate.”

Born in Sudbury, with early years spent Sault Ste. Marie and Walpole Island First Nation before moving to Aundeck Omni Kaning in grade school, Ms. Nahwegahbow has seen, and knows, that there are other important stories that need to be told. She wants to use her platform to humanize the marginalized. Not just the First Nations community, but all people of colour, or anyone that lives in a community on the edge. She whole-heartedly believes that an audience has the capacity to be transformed, and is hopeful that teaching will be the legacy her films leave behind.

This is not the first time The Expositor has featured Ms. Nahwegahbow—proof that she has some stories to tell. In 2004, she was featured in a story about her time as a second-generation legislative page at Queen’s Park, 20 years after her mom had the same role. Three years later, she was one of five students selected from all over Ontario to attend a Nation Science Camp. As this latest article is being written, she is back in Sudbury, after finishing some work on the popular series ‘Letterkenny,’ and will spend the next few months working on a movie directed by Atikameksheng Anishnawbeck filmmaker Darlene Naponse called ‘Stellar.’ But, when she returns to the Island this summer, she hopes to rekindle the video production outfit that she started a few years ago, Sakena Media. She has already produced some videos for the Chiefs of Ontario, Ontario First Nations Young People’s Council and wants to do more to help promote and market Manitoulin small businesses and organizations.

While she’s trying to grow her own business every chance she gets, she is pragmatic about her career, and takes work in the industry whenever she can. Two years ago, Ms. Nahwegahbow had the opportunity to work on the latest re-boot of the ‘Resident Evil’ franchise. “In film school, the dream was to go to Hollywood, but I feel like did reach my dream because I did work on a Hollywood movie, it was just here, in Canada.” It was another chapter in a book that is just getting started.

Storytelling is more than humanity’s oldest pastime, it is the vehicle by which we teach, the vessel by which we share ideas and traditions. The job of a storyteller is to share—their story, our story, someone else’s story. It is that act of sharing, though, that moves us all forward. The human connection made with a well-told story cannot be imitated, and we are all going to need authentic, passionate storytellers if we are to grow in a positive direction. That’s why we are so lucky to have Ms. Nahwegahbow, and young storytellers like her, who will continue to share their talents, their perspective and their voice. Especially at a time like this.

For more on Ms. Nahwegahbow’s company, or to reach out, visit at sakenamedia.com. 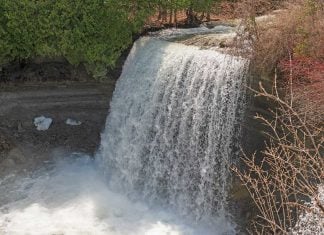