MANITOULIN—Manitoulin women baseball players from across the Island united this summer, casting aside years of friendly community competition to join forces as one team, 20 Shades of Grey, representing Manitoulin Island in the Espanola Slo-Pitch League. 20 Shades of Grey was the only team in the league from Manitoulin and showed the league what Island women are made of when they took home the second place title of the A division championships this past weekend.

“I learned about the Espanola Slo-Pitch League and took it upon myself to try something different,” continued Ms. Madahbee. “Teresa Recollet  told me about the league and spoke on my behalf at the spring league meeting about a Manitoulin team joining the league. From there, we joined the Facebook group and got involved.”

Ms. Madahbee said that she was able recruit 18 women for the league and that the team was also successful in fundraising the $1,200 league fee to cover the cost of the baseball fields, balls and end of the year tournament and dance.

“We had players from Gore Bay, Mindemoya, Aundeck Omni Kaning, Little Current, Wikwemikong, Manitowaning and M’Chigeeng,” shared Ms. Madahbee. “The girls’ backgrounds all varied with some having a history of playing slo-pitch and others fastball, but we all came together and worked well as a team. My dad Duke Madahbee also came on board mid-way through the season as coach, which was great.”

Travelling to Espanola or Sagamok for one to two games each week, 20 Shades of Grey played 22 games, accumulating 37 points, 18 wins, three losses and one tie.

Their high number of wins earned the Manitoulin ladies a place in the A division round robin leading up to the league championships with the team winning three and tying one of their five games.

“In the championships this past weekend we won our first game against Nick’s Cat House 21 to 4,” Ms. Madahbee said. “Our second game was against the Sagamok Gunners and we won 10-5. In our final championship game against Dan’s Towing we unfortunately lost 11-7.”

“I am really glad we got involved,” said Ms. Madahbee of the league. “It was a good experience to all come together from across the Island and represent Manitoulin. We are looking forward to the 2016 season and another shot at the championship. We had a lot more interest from other Island ladies half way through the season, so I strongly recommend anyone else who is interested on Manitoulin to look into forming a second team—you only need 10-13 ladies on the roster.”

For more information about the Espanola Slo-Pitch League visit their Facebook page. 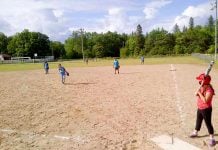