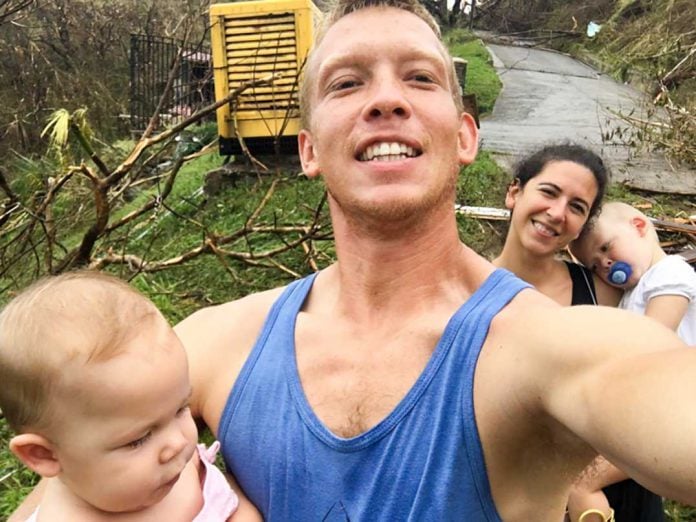 TORTOLA, BRITISH VIRGIN ISLANDS—Nathan Wong, formerly of Spring Bay, spent the afternoon of September 6 huddled in a basement bathroom, sheltered under a wet mattress with his partner Mouzaya Dabboussy and their two young children, Zach and Noah, as Hurricane Irma raged outside, destroying the world around them. It would be six days until they were able to get from Tortola to the safety of Canada.

“The last big storm to hit the BVI was Marilyn in 1995, and that was a category 3 and not direct,” Mr. Wong told The Expositor during a phone interview last Wednesday. “Tortola is such a small target, twelve by three miles, a 10th of the size of Manitoulin with three times the population. We never thought we would be in the eye of the storm. We were following the storm leading up to Wednesday, but we thought ‘what are the chances it’s going to hit us?’ Even the day before, Mouzaya asked me to take down the bathroom mirror and store it away—the bathroom is completely gone now—we just had no idea.”

When it was certain Irma was headed for Tortola, Nathan and his family sought shelter at their neighbour’s home.

“John’s (Bagalini) home was a lot more sturdier than ours and we took shelter at his home, in his basement,” said Mr. Wong. “Around noon we could hear the balcony rip off. The strongest winds were around 1 pm and the pressure didn’t just blow out the windows, it ripped them and the doors out, frames and all. There was a spiral staircase down to the basement that we couldn’t seal off and when the roof ripped off we ran to a small bathroom, which was through a bedroom in the basement. I pushed my son into the bathroom and looked back to see Mouzaya and our baby trying to get over an overturned couch, I ran back out to help her. We didn’t know if the ceiling would hold up in the bathroom so we dragged a mattress in and placed it on an angle, huddling under it.”

Mr. Bagalini, Mr. Wong and his family spent the next seven hours in the small bathroom waiting for the storm to pass. When they emerged they were exhausted and slept on the wet couches in the basement.

“When we went outside the next morning and looked upon the destruction, there wasn’t a leaf in sight,” he said. “Trees that were three or four feet wide were broken in half. Most of the homes have concrete bases and wooden roofs and they were destroyed. There was debris everywhere. There was no cell signal, so we borrowed a car and went to town; we live four kilometres outside of the capital Road Town. Out of John’s, mine and Mouzaya’s phone, only one of us got a signal in Road Town and we were able to reach out to our parents in Canada and let them know we were okay.”

Mr. Wong said it took another four days for the (British) military to come and the situation was becoming desperate.

“Everyone lost everything,” he said. “There was no power—no electricity and no water—and people started looting in town just trying to get food and survive. We were lucky to be outside of town and also very fortunate because John is the owner of a restaurant and had a big deep freezer with chicken and had rice and a propane gas stove. He fed and housed us until we were able to leave on Tuesday (September 12). We were very fortunate.”

Mr. Wong’s family’s home was destroyed. They salvaged what they could and set to getting their children off the island.

“We learned that the DFAIT (Department of Foreign Affairs and International Trade) had no evacuation plan for Canadians,” he explained. “The UK eventually flew in 300 military officers, around day three or four, which helped with the looting and crime, but they still hadn’t organized the distribution of food by the time we were able to leave. People were sleeping on the streets in town. There was garbage heaped up along the sides of the street like four-foot snow banks.  People lost everything—no one got away with their stuff. People were driving around in smashed up cars—it was like a war zone. The hospital was full of people with big gashes, broken bones, impaled with pieces of glass.”

Back in Canada, Ms. Dabboussy’s mom was reaching out to the Canadian government and DFAIT, trying to get her daughter and family back home. She was able to book flights from BVI to Puerto Rico to Ottawa, but the couple soon discovered the BVI airport was closed.

“There were huge catamarans in the middle of the road, the port was shut down and so was the airport—there were no commercial flights out,” said Mr. Wong. “The only thing you could do was charter a private plane if you had the money.”

Mr. Wong and Ms. Dabboussy had both applied and been accepted to a mentorship program, Unite BVI, a non-profit organization founded by Richard Branson of Virgin and Larry Page of Google last year.

“We had the opportunity to network with a lot of people through the program,” said Mr. Wong. “We started reaching out to people we had met and one of them, Kim, who works for Unite BVI, was able to arrange for two seats in emergency evac helicopter—we were incredibly lucky. The communication was sparse and we had to drive into town to send or receive messages.”

On Tuesday morning at 8 am, Mr. Wong and Ms. Dabboussy and their two young children boarded the helicopter, which took them to Puerto Rico. From there they were able to board their connecting flight with United Airlines to Ottawa.

“We were so lucky to get out,” Mr. Wong stressed. “We would still be there if we hadn’t been a part of that program and they paid for the helicopter. There are still so many Canadians down there—ones who call BVI home and tourists who are stuck.”

Mr. Wong and his sister Natasha Rueter (owner of the Black Butterfly and formal owner of The Island Jar in Little Current) grew up in Spring Bay. Their father moved to the BVI in 1995, and Mr. Wong spent the subsequent summers travelling to visit his dad.

“I knew since I was 17 that I wanted to move there,” said Mr. Wong. “My dad was an entrepreneur and I knew I wanted to be as well. Tortola is like Manitoulin. I liked the small town life—knowing everyone and I liked the tropical weather.”

After graduating from Carlton University with a bachelor of commerce and international business, Mr. Wong moved to Tortola in 2010.

He was introduced to Ms. Dabboussy, a realtor, through his sister Natasha and after a long distance relationship, she moved to Tortola and began their family. Mr. Wong owns a concrete business, which specializes in flooring, countertops and tile restoration.

“The ports aren’t open in Tortola, and everything is shipped in,” said Mr. Wong. “There will be months of cleaning up. It’s just crazy. A lot of people, us included, underestimated the storm.”

For now Mr. Wong and his family are safe in Ottawa, but they lost their home and the majority of their possessions.

A Go Fund Me campaign has been started for the family, with any funds going directly towards rebuilding their small home and lives. To donate visit, https://www.gofundme.com/4epcfsg. 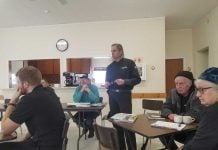