MANITOULIN— Monarch butterflies have been frequently in the news over the past two years since it was discovered they have suffered serious declines. Likewise, several articles in this newspaper have examined the plight of the monarch population on Manitoulin Island.

In the mid 1990s, up to 1 billion monarchs made the flight from southern Canada and the northern US to Mexico. Researchers now estimate that only about 60 million monarchs remain, representing a decline of more than 80 percent from the average across North America.

Five years ago, it was easy to find caterpillars of monarchs on most patches of milkweed (their only source of food) on Manitoulin. Likewise, adult butterflies, both those returning from the south to re-establish a new generation, and adults of the generation produced here, were commonly seen while driving local roads and walking along ditches and meadows.

For the past two years, both caterpillars and adult butterflies were rare on Manitoulin as we joined the rest of Eastern North America in becoming concerned that something was seriously wrong with the population of this iconic insect.

Reasons for the decline are unclear, but it is thought that the widespread use of herbicides to control weeds in and near agricultural crops and the resulting decrease in milkweed is the main culprit. Healthy patches of milkweed were found on Manitoulin during this period so a lack of host plants here is not part of the problem. Monarchs from the south have simply not been showing up on Manitoulin Island.

However, the summer of 2015 has been encouraging as more returning butterflies were observed in May and June on Manitoulin than in previous years, and caterpillars were found on many patches. I saw my first two returning adults at Wikwemikong on June 13 and recorded the observation with Monarch Watch. Someone else recorded seeing an adult near Little Current a week earlier.

Monarchs and their relatives are tropical insects, but once they evolved the ability to migrate, they were able to exploit the North American summer food supply of milkweed and then retreat southward once the cold temperatures of fall arrived. The two butterflies observed in Wikwemikong, as did all others on Manitoulin in the past, arrived as part of an amazing biological and geographical journey. The most awesome segment of this journey is the fall migration whereby these insects fly about 4,500 km from Manitoulin Island to the oyamel fir forests on mountain tops north of Mexico City, an area they had never seen before. How they do this remains as one of the natural world’s biggest mysteries.

The monarchs arriving on Manitoulin in late spring this year were from the population of butterflies that overwintered in Mexico and were produced in the summer of 2014. As the overwintering population flew north in the spring of 2015, they laid eggs on the first milkweed they encountered in the southern US, then died. Adults from these caterpillars continued north and likewise laid eggs on milkweed and then this pattern continued until adults arrived on Manitoulin Island. It is likely that the butterflies arriving on Manitoulin are fourth generation and came from butterflies produced at the latitude of Indiana, Ohio and Pennsylvania. In other words, the first butterflies we see in late spring are not the ones that overwintered in Mexico, then flew back to Manitoulin, but rather the great, great grand-daughters and grandsons of the overwintering population. This is in contrast to local ducks, geese, sandhill cranes, etc. whereby the same individuals that fly south in the fall, return in the spring.

On August 3, my wife Marilyn and I observed 15 adult monarchs over a period of about an hour along the boardwalk at Providence Bay. Three of these adults were somewhat faded and tattered and likely were part of the generation arriving from the US and had yet to mate and lay eggs. The male shown in this article feeding on a milkweed flower that day at Providence Bay was likely in this category. However, the other 12 were bright and in excellent condition and part of the 2015 generation produced on Manitoulin.

Besides their beauty and our knowledge of their migration, monarchs have a high profile because all stages of their life cycle are easily observed in a patch of milkweed. Eggs hatched into pudgy, colourfully stripped, worm-like caterpillars with antennae-like structures on both their ends.

Once full grown in about two weeks, caterpillars undergo metamorphosis into a green and gold chrysalis. Two weeks later, the chrysalis is transformed into an adult butterfly. Eggs take four to five days to hatch, the caterpillar stage lasts from 10-14 days and the chrysalis stage one to two weeks. Full grown caterpillars usually leave the host plant to find a safe place to form its chrysalis. In other words, monarchs go from eggs, to caterpillar, to chrysalis to the adult in just under a month. 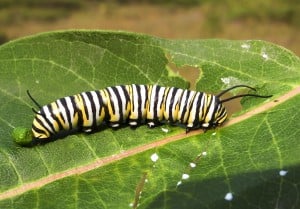 On August 6, we observed caterpillars on milkweed growing along Bay Estates Road near the home of Melissa and Mark Volpini. The adult butterflies from these caterpillars will spend the rest of August and part of September feeding on the nectar of Manitoulin flowers. These butterflies enter what is called a reproductive diapause. During this phase, their reproductive system shuts down so they can use all their energy for the flight south. Egg and sperm development is suppressed, courtship is quelled and they begin aggregating in late afternoon and form clusters on bushes and trees at night.

But how can an insect that weighs a little more than half a gram, or about the weight of a dime, fuel its southward migration and survive several months with no significant access to nectar along the way and then begin the northward migration the following year? Part of the answer is the energy obtained from the leaves of milkweed eaten during the caterpillar stage. Monarchs convert about 81 percent of the carbohydrates in leaves of milkweed into lipids (fats). This energy is conserved through metamorphosis to the adult butterfly and is stored in special cells called fat bodies in the abdomen. Indeed, examination of the abdomens show that fat bodies of migrating monarchs make up 34 percent of their dry weight – they are virtual butterballs!

Majestic and beautiful with their distinctive orange and black markings, monarchs have become one of Canada’s most beloved insects. They capture our attention as they glide by with outstretched wings and the story of their biology, annual migration, and the fear of their becoming extinct has elevated them to iconic status from grade-school children to politicians. Thousands of citizens throughout North America are donating time and effort tracking the migration of monarchs through citizen science organizations such as Monarch Watch and Journey North, both of which were founded to engage the public with the science of monarchs, environmental education and conservation.

Starting in the spring of 2014, thanks to initiatives proposed by the David Suzuki Foundation and Monarch Watch, members of the public have been planting milkweed and flowers in non-agricultural areas such as along roadsides, on school grounds, in parks, and in residential areas. These plots provide the resources needed to produce successive generations of monarchs and to provide fuel in the form of nectar-producing plants for the long fall flight to Mexico.

More recently, the David Suzuki Foundation launched a Monarch Manifesto encouraging people throughout the monarch’s path to pledge their part in ensuring the butterflies continued recovery. Visit davidsuzuki.org/monarchmanifesto to sign. Participants are asked to commit to doing three simple things for the next couple years: grow milkweed, report monarch sightings and avoid using pesticides on their properties.

Participants are asked to reach out to at least one neighbourhood school, faith group, business or other institution about planting a butterfly garden. The Monarch Manifesto not only hopes to help bring back monarch butterflies, but to also to support other important pollinators such as bumblebees and honeybees.

The extensive publicity throughout Canada, the US and Mexico has meant that monarchs have become an enduring symbol of hope and transnational conservation efforts. The plight of monarchs was even discussed In February 2014 at a summit meeting in Mexico between Prime Minister Stephen Harper, United States President Barack Obama, and Mexican President Enrique Peña Nieto. As a result of their discussions, monarchs have come to symbolize partnerships between the three countries and a shared understanding that led to funds for protecting monarch habitats and migration.

Monarchs have become a powerful means to mobilize people around what they see as a noble cause–the conservation of biodiversity. School children now see monarchs as a symbol of nature, environmental health, and a teacher of how nature works.

Over a million monarchs have been tagged by Monarch Watch volunteers who place a lightweight tag on one hind wing. An ID number on each tag is used to keep track of information on each butterfly, the tagger and point of recovery.  About 16,000 tagged butterflies have been recovered.

Adult monarchs produced on Manitoulin Island in late summer have a unique status in the saga of this amazing insect in that our butterflies are among those that must fly the furthest to reach Mexico! Manitoulin residents can help by growing late summer flowers in their gardens that produce lots of nectar so the butterflies can fuel up before flying across Lake Huron and reaching Mexico before the arrival of killing frosts.

As more adults are tagged and released each fall on Manitoulin Island, it is only a matter of time before one of our butterflies is found in Mexico providing the undeniable proof that our butterflies do indeed fly 4,500 km to Mexico.

EDITOR’S NOTE: Joe Shorthouse is Professor Emeritus of Entomology at Laurentian University and a frequent contributor to the Manitoulin Expositor. He released tagged monarchs in Lethbridge, Alberta in 1964 when he was a teenager, sent live from Toronto by monarch scientist Dr. Fred Urquhart of the University of Toronto. The experience led Joe to pursue a career in entomology at the Universities of Alberta and Saskatchewan. 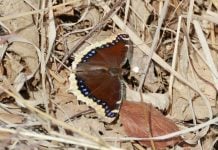