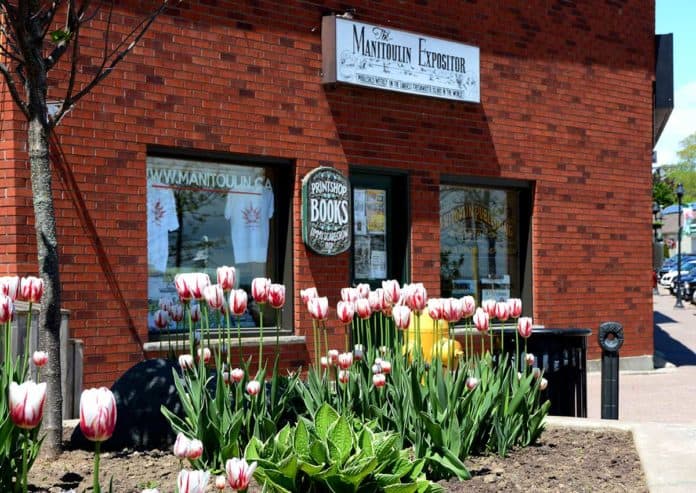 MANITOULIN – Readers of this week’s edition of The Expositor will see something different at the top of Page 3: the flag for the Manitoulin West Recorder.

This is an indication of the fact that last Friday’s paper was the final one for the Recorder, in its traditional form, and that as of this week, the subscription lists of Manitoulin Island’s two newspapers have been combined.

“However,” she continued, “the increasing costs of printing and distribution as well as other financial and business practices made us look seriously at combining our two newspaper products and this week’s paper is the result.”

Ms. McCutcheon has named veteran Manitoulin newsman Tom Sasvari as editor-in-chief of the amalgamated enterprise and another long-time staffer, Michael Erskine, will be its associate editor.

Ms. McCutcheon will now focus on her publisher’s role in the community but will also continue to contribute editorially to the paper.

The amalgamated newspaper will maintain its office in downtown Gore Bay and Mr. Sasvari will continue to work from there but he will also have a desk at The Expositor Office in Little Current where he will meet with staff at least twice-weekly.

The amalgamated newspaper features the Recorder’s rural correspondents and Ms. McCutcheon expressed her thanks that these recorders of the community news—from Kagawong, Barrie Island, Silver Water, Meldrum Bay and the Millsite Apartments in Gore Bay—will play an important role in the amalgamation process. They can be found on Page 6 this week.

The subscription lists of both Island papers have been combined and anyone who had subscribed to both will see their subscription periods extended according to the total number of months that remain in each subscription, plus a bonus month, as of last Friday, May 26.

Ms. McCutcheon stressed how important it is that Manitoulin Island continues to have a strong and healthy vehicle both to record the news (and to record local history in the process), as well as a place in which community makers can express their opinion.