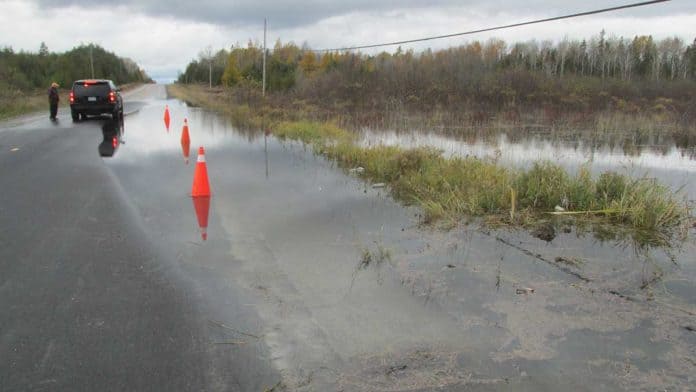 GORDON – A Gordon/Barrie Island Township resident recently alerted the Ministry of Transportation (MTO) and the Ontario Provincial Police (OPP) about a potentially serious issue with a road being almost washed out on Highway 542 just outside of Gore Bay (between Tobacco Lake Road and Golf Course Road).

“Today the water was across the road; for a highway, this is not acceptable,” stated area resident Bill Wilson this past Sunday afternoon. “The MTO should be closing the highway. If someone hits that much water in a car doing 80 kilometres per hour, you’re gone.”

Mr. Wilson explained, “I called the Manitoulin detachment of the OPP last night to indicate that there was water across the road. The (OPP) officer I talked to said he would call the MTO about putting up signs on the road and there were three or four orange traffic cones put down near the area. But today the water has gone up even further—it’s running right across the road.”
Mr. Wilson explained, “there is a creek there and the beavers plug up the culvert(s) every year and the highway guys keep having to clean it up every year. It’s like this every year.”

“It’s dangerous enough that when it gets like this the highway should be closed,” said Mr. Wilson. “To not block the highway and put up warning signs is unacceptable.”

“I don’t blame the OPP, it (highway maintenance) is not their responsibility,” continued Mr. Wilson.

By Monday morning, Mr. Wilson told the Recorder that signs had been put up and the area had been cleaned.

Carole Paiement, communications co-ordinator with the Northeast division of the MTO told the Recorder in an email Tuesday, “in response to your inquiry regarding the flooding issue on Highway 542 on Manitoulin Island. Signs and traffic cones were placed at the location where the flooding occurred to make drivers aware. A culvert under the highway was not flowing properly due to a blockage. The ministry’s contractor, Emcon, cleared the culvert openings on Monday, October 26. The water has since receded and there is no longer a concern with water on the highway. All work to resolve this issue was completed on Monday, October 26.”