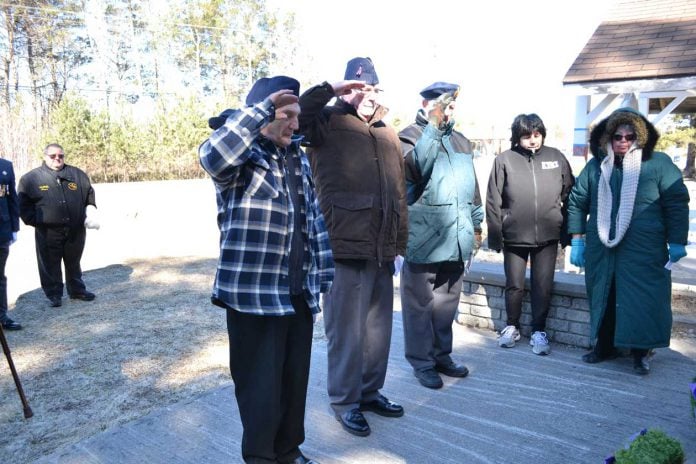 The service began with the singing of O’ Canada, followed by master of ceremonies Colin Pick giving welcoming remarks.

“April 9 will mark the 100th anniversary of the battle of Vimy Ridge and a group of cadets from the Manitoulin Sea Cadets will be attending the service in France,” said Mr. Pick, adding that the six Island cadets, along with their four chaperones, would be joining 800 cadets and an expected 25,000 Canadians for the ceremony.

“The battle of Vimy Ridge is a mark on our history and we need to remember the 3,600 Canadian soldiers who were killed in action and the over 7,000 who were wounded during the battle,” added Mr. Pick.

The Last Post was played prior to two minutes of silence. Members of the Sergeant Charles Golden Silver Star Memorial Rifle Team gave the rifle salute.

Mr. Pick led the group in a reading of ‘In Flanders Fields,’ and the service concluded with the Act of Remembrance and a closing prayer.