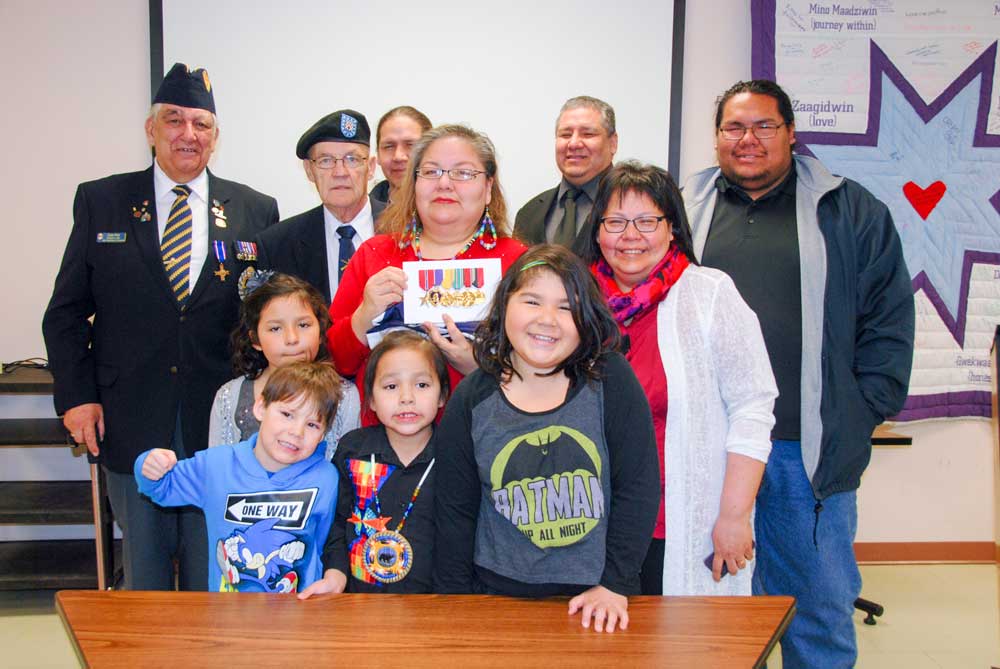 WIKWEMIKONG—Late last month friends and family of the late Wilfred Trudeau gathered at the Wikwemikong band council chambers in a special ceremony that saw the WWII war hero’s medals of honour returned to the family.

It was a fortuitous meeting between Alanna Trudeau, Mr. Trudeau’s daughter, Colin Pick, president of the War Pensioners of Canada and Wayne Golden, a member of the Little Current Legion’s executive and an advocate for the recognition of veterans, during the War of 1812 ceremony that took place at the Wikwemikong High School in February.

Ms. Trudeau, emcee for the event, struck up a conversation with Mr. Pick and Mr. Golden, sharing that her late father’s medals were removed from his home and never seen again. He served as a paratrooper in WWII in the 82nd Air Division with the United States Army, seeing action in Africa under General Patton and also in Europe. He was wounded three times.

Mr. Golden explained that all he needed was her father’s service number and that he would take care of the rest. Ms. Trudeau said that she called numerous family members, none of whom could remember where to find the veteran’s service number. A few days into her search, Ms. Trudeau, who works at the band office, just happened to look at the Warriors Wall, which lists all of the Wikwemikong band members who have served in the armed forces, and there it was, right before her eyes. She quickly called Mr. Golden who then got the ball rolling with his contacts in the United States. Mr. Golden is himself a US Vietnam veteran.

“You have no idea how rewarding it is to do this kind of work,” Mr. Golden said.

“It was important to my family, and this community, that we get these medals replaced,” Ms. Trudeau said.

She told the assembled crowd that years ago her father’s medals went missing—a WWII American Defence Medal, a Bronze Star, a European-African-Middle Eastern Campaign Medal, WWII Victory Medal, WWII Army of Occupation Medal and a Purple Heart. “He just let it be. He didn’t think he was important enough to do anything about it,” she said. “He didn’t know what to do, so he just left it.”

Ms. Trudeau told the group that her family received an American flag from the US Army when her father died and this momento was brought out for the ceremony.

“Hopefully you gentlemen will be back again and again to help other community members get their medals back,” she said to Mr. Golden and Mr. Pick.

Ms. Trudeau shared that her grandfather served as a sapper in WWI and worked as a prisoner of war camp guard in Espanola during the Second World War. His medals were lost too.

“He didn’t talk too much about the war,” she continued, speaking of her father, “and definitely not to girls. He sometimes did after a few drinks.”

Following a ceremony conducted by Mr. Pick and Mr. Golden, the new medals were presented to Ms. Trudeau.

He urged those who may have family members who are also missing war medals to contact himself or Mr. Pick, who will provide them with the necessary forms.

Mr. Golden also noted that he has helped Legion Branch #177 to form a rifle party, which will be available to give a 21-gun salute at the graveside of veterans.

“It was a pleasure to have known your dad,” Mr. Pick told Ms. Trudeau.