This year there were students from Lakeview School, Pontiac School, Little Current Public School and Central Manitoulin Public School that visited the hatchery.

During the students’ visit they saw first hand walleye being captured in a hoop net, eggs harvested from females and males milked of sperm with a feather used to mix the two, fertilizing the eggs. They also learned how to tell the difference between a small mouth and large mouth bass and how to build a bass nest.

The students rotated to different stations to learn about fossils, fish and animals, walk Bass Creek, learn about aquatic life forms, see how the walleye hatchery works, discuss invasive species and learn about the importance of wildlife conservation.

This is the 13th year that the LCFGC has organized the school hatchery visits. The idea was suggested by Ms. Stringer who was the principal at Little Current Public School at the time in 2005. Over the years the program has expanded to include students from across the Island.

As part of the program, each student received a fishing rod and tackle from the LCFGC at the end of their visit. 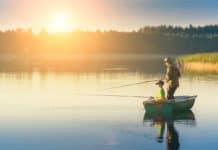