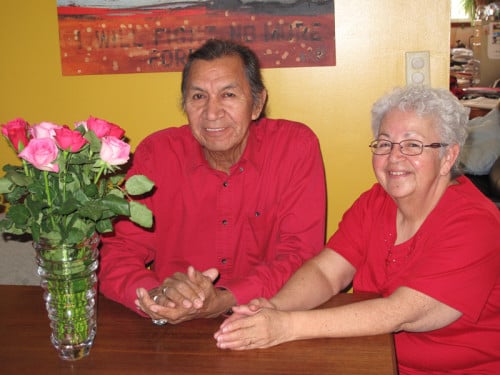 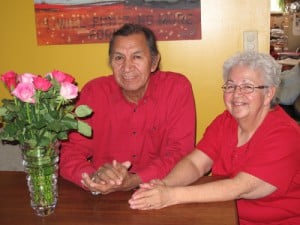 M’CHIGEENG—To know them is to love them. Victor and Molly Migwans of M’Chigeeng have been married for 43 years and all it takes is to see the couple to know that they are as in much in love today as they were in 1968 when they were married.

Whether it is at the market in M’Chigeeng, where Victor plays music in the summer, the grocery store, bingo, a community event or just strolling on a walk, the couple can always be seen side-by-side, holding hands, a sign of their love for one another.

When this reporter arrived at their cozy home last week to interview the couple, Victor and Molly answered the door together both dressed in red, matching the red roses on their kitchen table.

As we sit down to begin the interview, Molly placed a photo of her and Victor on their wedding day in front of me. Dressed in a white dress with a fur hat, Molly smiles as she cuts her wedding cake with Victor dressed in a black suit, one hand on her shoulder.

“We met through our families I guess,” began Molly, a member of the Ense family from M’Chigeeng. “We both grew up here in M’Chigeeng. Victor’s dad was great friends with my grandfather.”

“I always knew she was around,” joked Victor.

Molly explained that their first date was to a dance at the old M’Chigeeng hall.

“I guess it was a summer romance,” said Molly. “We just knew and then we were married a few months later on November 16, 1968.”

The couple explained that their wedding ceremony was held at the Roman Catholic Church in M’Chigeeng on a beautiful November day.

“It was a wonderful sunny day,” said Molly. “It felt like summer even though there was a dusting of snow on the ground. It was a small wedding, just with family and friends.”

Their first child was born the following spring, on April 4, 1969.

When asked what the couple thought of their whirlwind romance, Molly answered that they were just “soul mates.”

Victor explained that he felt they both had a lot in common.

“We both came from big families on both sides,” said Victor. “We were used to having a lot of family around, that’s probably why our house became grand central, where everyone would come to visit. Our home became a spot for everyone to connect.”

Molly said that the secret to their 43 year marriage was doing everything together.

“We always did everything together as a family, like travelling and camping and we still do as a couple,” said Molly. “We spend a lot of time together now that our kids are grown and we are by ourselves again.”

“We know how people see us, always together,” added Victor.

“I love his humour,” said Molly. “Victor always makes everyone laugh. He always has a story to tell.”

“I love her cooking,” joked Victor.

When the couple isn’t busy hosting family or babysitting one of their 10 grandchildren, they said they like to get out of the house.

“Since Victor retired we can do anything, anytime,” said Molly. “We go to the movies, restaurants and once and awhile, the casino. We really like their bread pudding.”

When asked what the secret is to a successful, long marriage the couple replied, “Spend a lot of time together and work together as a team.”

“Work it out if there is a problem,” encouraged Molly. “Sometimes there is a lot going on one moment, but it’s important to remember it’s only a moment. The next day things can always look brighter and problems seem smaller.”

Molly explained that a lot of young people just “give-up” before tying to make marriage or relationships work.

“I see a lot of young people just give up,” said Molly. “The next thing you know they break up and it’s hard, especially if there are kids involved.”

Victor and Molly said that every year they celebrate Valentine’s Day differently.

“Sometimes we go out for dinner, other years we spend it with family,” said Victor.

As for this year, the couple wouldn’t reveal their plans, but said that it would be great, whatever they decide, as long as they are together.