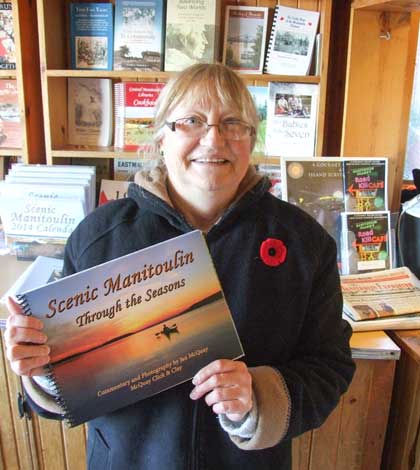 GORE BAY—Jan McQuay of Mindemoya, best known for her Scenic Manitoulin calendars, has produced a coffee table book which depicts photos of the Island—Meldrum Bay to Wikwemikong—along with commentary that provides the reader a fascinating aspect of the rich history of the Island.

From sand hill cranes to Misery Bay Provincial Park to cows grazing in a pasture, Ms. McQuay shared a myriad of photos and subjects during the launch of her book at the Gore Bay Harbour Centre last week.

Ms. McQuay stated, “it was my way of discovering Manitoulin Island. One thing I wanted to do was write about and (research) what interested me.”

“We never saw sand hill cranes when I was growing up here,” she added. The species declined almost to the point of distinction back in 1916 (when the commercial hunt was banned) and were only reintroduced in the 1970s. These birds are quite large and have a very distinctive sound.

“Misery Bay,” Ms. McQuay continued, “is one of my favourite spots on Manitoulin.” A member of the Friends of Misery Bay Provincial Park, Ms. McQuay stated that it is 8.4 square kilometres and made up primarily of donated land.

Cows grazing on property owned by Bruce and Helen Gordon (Range Road en route to Maple Point in Billings) may not sound very interesting, but after much research Ms. McQuay learned and shared the importance of cattle farming on the Island. Formed in 1944 the Manitoulin Livestock Co-operative saw more than 320 cattle producers make the trek, some by foot (50 kilometers from Mudge Bay to Little Current for example), to the sales barn in Little Current.

Ms. McQuay told The Expositor that while driving around the Island in past years taking photographs for her calendars (which she has been selling since 2005), “I would think how I didn’t know a lot about what I was looking at.” For example, the deer on the Island. Questions like how did they get here, the conditions they live in, and so on.

It became a lesson in history, natural science and geology when discovering about different trees on the Island, said Ms. McQuay.

“This book is a collection of pictures and commentary that together convey my impressions of the many fascinating aspects of Manitoulin Island. I hope you like it,” Ms. McQuay concluded.

‘Scenic Manitoulin Through the Seasons’ is on sale at the Rain Barrel and The Manitoulin Expositor in Little Current. Ms. McQuay will have her book available at the MSS Shopping Spree on Friday and Saturday of this week and in Mindemoya next Saturday, November 23.

The cost is $50 and will make a wonderful keepsake gift for anyone on your Christmas list.