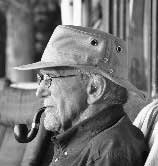 John Francis Mills Bailey died peacefully at the Manitoulin Health Centre in Little Current on Wednesday, March, 18, 2015 in his 92nd year. Predeceased by his wife, Joyce Isabelle (Tindle). Survived by his four boys, Chris (Leslie), Peter (Wendi), Mike (Nevena) and Geof (Gail). Predeceased by his brothers, Alden and Howard. Survived by his sister, Thelma (Endicott). Proud Poppa of Erin, Nicole, Stephanie; Alexandra, Coleman, Allison, Cameron, Sophia, Maria; Holly, Matthew, Kaitlyn, Leanne and Sarah. In 1948 as a young adventurous doctor, he made his way to Manitoulin Island to begin a practice in medicine, a career chosen because he wanted to work with and be helpful to others. He endured the hardships that many medical practitioners experience in isolated communities in Northern Ontario. But with determination, dedication and compassion, he served the people of Manitoulin. Whether traveling by rickety biplane into isolated villages or long winter treks across frozen lakes in the dead of night, his patients’ needs were always a priority to him. He cared passionately for the welfare of Islanders and helped establish modern medical facilities and specialist clinics. He attracted additional doctors to join his practice and was instrumental in building the Centennial Manor, where he stayed for his last few months. Later in his career he worked closely with and learned from Ron Wakegijig. Together they became “trailblazers” in the assimilation of western medicine with Native medicine. To his last days he was passionate about the benefits of the partnership. His dedication did not go unnoticed as he was recognized for his outstanding contributions to medicine by being selected as the Canadian Family Physician of the Year in 1989. Furthermore he was appointed to membership in the Order of Ontario in 1990. But one of the proudest moments in his career came when he was made an honorary Ojibway Chief (Gaikezheyongai) by the Wikwemikong First Nation in recognition of his care of Native families. When not serving his patients (which was seldom), he could be found with his family, either on his sailboat in the North Channel (aptly named Swift Wing), at their cottage or skiing on the slopes of a nearby ski-hill. Memorial Service at St. Bernard’s Roman Catholic Church on Wednesday, March 25, 2015 at 11 am. Donations to Manitoulin Centennial Manor Auxiliary would be appreciated. If you would like to make a donation to the Manitoulin Centenntial Manor Auxiliary, please bring a cheque payable to them. Record your thoughts, memories and photos at www.islandfuneralhome.ca.