EVANSVILLE — Athlete Joseph Maxwell of Evansville has begun his off-season discus and shot put training after taking a much needed break following a busy season.

This summer he brought home gold in the men’s discus throw 1.5 kg at the National Youth Track and Field Championship in Quebec and placed sixth in shot put in the under 18 division at the IAAF World Youth Championships in Colombia.

“I’ve been back training for about a week now,” the 17-year-old athlete told The Expositor. “My off season training includes going to the gym, weight lifting and throwing two to three times a week. I’m working towards my indoor season, which starts in January.”

Joseph explained that a lot of his indoor season meets will take place at York University in Toronto, but that he also plans to attend a few meets in the United States as well.

“To qualify for any of the throwing sports in the Olympics you have to be 18 or older, but you also have to meet the qualifying standard and finish in the top three in Canada at the National Track and Field Qualifying meet,” said Joseph. “The qualifying throw distance varies each year, but it seems to be going up because it is based off of the world rankings. For 2016 I think it is around 20.50 metres. I have thrown close to that (at the IAAF World Youth Championships in Colombia his best throw in shot put was 20.29 metres). At the Olympics the shot put is also a heavier weight, 7.26 kg, while at the World Youths it was 5 kg.” 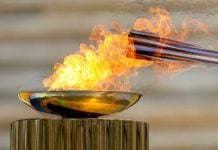