WINNIPEG – Physician assistant Josh Wilson, son of Bruce and Ruth Wilson of Little Current, has seen a lot of territory since he left Manitoulin’s shores to join the military as a medic. First through a tense 2003 tour as a peacekeeper in Bosnia to serving in an active combat zone in Kandahar, Afghanistan during 2010, he has seen his share of combat.

“When we were in Bosnia there were lots of people who were not happy to see us,” he said. “Everyone wasn’t getting along very well and we were there to keep them apart.” The Bosnian tour would have been fairly familiar to Canadians wearing the blue beret in Cyprus.

“Cyprus would have been very similar,” agreed Lt. Wilson.

Although he is in the naval branch of the forces, his job in Afghanistan involved getting up close and personal with some very scary stuff on the ground. “My job was with an engineering recon troop,” he said. “Most days that meant checking roads and bridges, repairing damage.” Many of those days also meant hearing explosions from ordinance or improvised explosive devices set by people intending harm to the men and women in uniform or unlucky civilians.

When he was on the water aboard the HMCS Whitehorse patrolling the coast of British Columbia, Mr. Wilson’s role morphed into something more like a SARtech (search and rescue technician).

These days the physician’s assistant is training for a stint as part of Operation Caribbean, filling a similar role as well as patrolling for drug runners and other ne’er do wells in the region.

The career path for someone in the medical branch of the Canadian Armed Forces begins as a medic and progresses to a physician’s assistant—that’s equivalent to a nurse practitioner in the civilian world. In military parlance the physician’s assistant role is equivalent to a sub-lieutenant, while the medic role is more of a warrant officer designation—petty officer first class.

Lt. Wilson said he joined the service when he was in his early 20s. “I was in nursing and I thought I wanted to do something relevant,” he said. “It was something exciting and it was a career where you could steadily up your qualifications.”

Seventeen years later Lt. Wilson expresses no regrets about the path he has chosen, but he admits it is a bit challenging for his family, given the regular moves his career entails.

“Luckily, my wife (Erin) is an emergency nurse, so she has been able to find work everywhere we have moved,” he said. “My daughters are 14 (Madison) and 12 (Maya) and they have had to move every two years.” His children are doing okay, noted Lt. Wilson. “They are tough kids.”

He may be in the navy, but that doesn’t cut the mustard when it comes to avoiding seasickness. “I do get seasick,” he admits, “but we have medication for that, and I’m in charge of the medication,” he laughs. Lt. Wilson anticipates staying in the military until he reaches retirement at 28 years in. 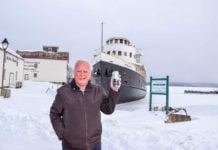