KAGAWONG —Summerfest is always a treat in mid-July in Kagawong, “Ontario’s prettiest village,” and last Saturday’s celebration was no exception. Threatening morning clouds did not dampen spirits one bit, and when they cleared by mid-day, people were crowding around the many events, enjoying the old-fashioned family games, food and fun in the warm sunshine.

Mayor Austin Hunt strolled through the grounds on the shores of the North Channel, obviously pleased with the turnout. “I remember summer activities happening here forever. There were costumes, there was a greasy pole over the water at the marina that was a lot of fun and before there was a community hall in Kagawong, we had dances at the marina too. Summerfest has been the name for these activities for 20 years now. I love to see people enjoying themselves.”

The day began with a filling pancake breakfast at the Park Centre, hosted by the United Church Men, while the United Church Ladies ran a silent auction. There was early-morning yoga on the beach and the famed ‘Running of the Balls’ ran all day. Everywhere you looked there were kids enjoying free rides on a big (or Voyageur) canoe, a scavenger hunt and lemonade and cotton candy. The Flush a Friend stand had children tossing balls to hit a target that unleashed a torrent of water over the poor victim, er, ‘friend’, who was standing underneath a bucket constantly being refilled by an all-too-willing event volunteer. Mayor Hunt cleverly put on a raincoat and opened an umbrella for his turn at being ‘flushed,’ to squeals of delight from the many kids assembled on the beach.

Barb Erskine, chair of the town council’s recreation committee who came to Kagawong from Toronto 10 years ago, credits Charlene Chambers for organizing this year’s “big success.” She said that Summerfest’s theme celebrates 400 years of the francophone presence in Ontario and was designated as such by Ontario 400. “It’s a little-known fact that nine to 10 percent of permanent and seasonal residents in the Kagawong area are francophone,” Ms. Erskine explained. “A lot of francophones attend our events. We are acknowledging them by having the Voyageur canoe here today and the singer Marcel Beneteau performing “Les chansons des voyageurs” twice, at the marina and at the River Bend Stage.” The French-Canadian voyageurs (or travellers) transported furs in big canoes, like the one hand-built by Mark Gibeault on display at the beach, during the booming fur trading days of the 18th and 19th centuries.

There were burgers being flipped and market wares on sale in the pavilion, and, for the first time, Beaver Tails, that irresistible sweet doughy confection, at the tennis courts, with lemonade and iced coffee on Henry Drive. “Cooking with Bella” clown Carrie Latimer of Kagawong, in an outlandish pink tutu, enthralled a large contingent of kids, some with parents in tow, with her energetic dancing and prancing through the musical chairs set up on the tennis courts, complete with old rock ‘n roll hits on the loudspeakers. Sue Meert of Manitoulin Streams told visitors of the tours going on that day of their Kagawong River Rehabilitation Project and of the lottery they’ve got running until September 11, with prizes by Ramakko’s Adventure Store. Jenna Carter had a stand of her beautiful paintings of Manitoulin scenes on cards, with many buyers taking away memories of their Island visit.

The Kagawong Fire Department’s volunteer firefighters played a big part in the day’s success, with a fundraising drive at the entrance to the village, collecting donations in their rubber boots, making their fire trucks available to children eager to hop on board to sound the siren and operating the sprinkler for cooling everybody off at the water’s edge.

As the folk sounds of Rick Bobbette wafted from the pavilion, with the scent of cotton candy in the air and the old-time fair atmosphere transporting visitors back in time to Kagawong’s early days, well, you could be forgiven for feeling a little nostalgic. But then it was time for Movie Night at the library, and a good night’s sleep. 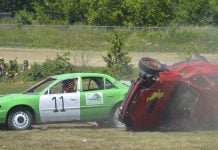 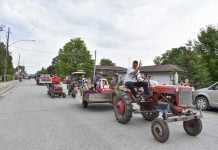 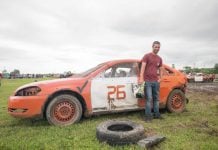 ‘The Race is On’ for Manitowaning’s Summerfest Weekend 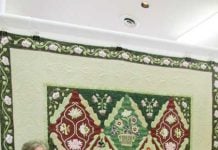 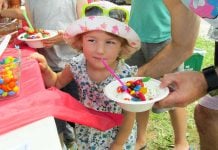 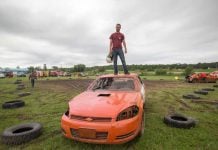