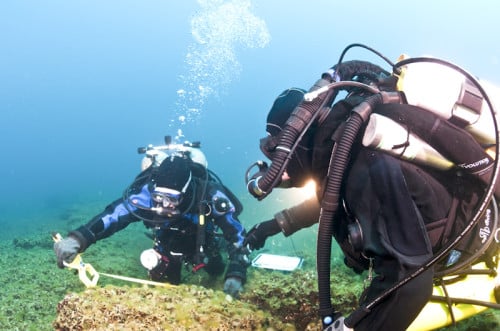 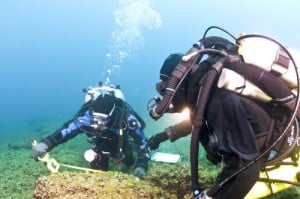 LAKE HURON—Roughly 10,000 years ago, a narrow ridge between what is now Alpena, Michigan, and Amberley, near Goderich, split Lake Huron into two smaller lakes.

Then, in perhaps as little as a year, the Alpena-Amberley ridge vanished beneath “gently” rising waters, according to John O’Shea, a professor of anthropology at the University of Michigan.

“We know it was a ‘gentle’ event, because there were no new beaches formed and rock piles weren’t knocked over by waves,” he said. “So we know it wasn’t a tsunami.”

What excites Mr. O’Shea about the ridge, however, isn’t how it vanished. What excites him is what the quick drowning of the ridge has preserved. Usually, historical sites have been disturbed by events, farming or are deeply buried.

In this specific case, the sites found on the ridge are a ‘missing link’ to a people anthropologists knew very little about. The discovery of a 9,500-year-old spruce pole this past summer is the latest discovery along the ridge.

After the water covered the ridge, “it was never disturbed again,” he continued. “You’re in the middle of Lake Huron and there’s nothing (down) there. It’s really profound.”

The ridge remained undisturbed and unburied because it was deep enough to avoid wave action and was also far enough from any source of sediment, Mr. O’Shea elaborated.

“It’s 60 miles away from any lake edge,” the researcher said. “So there’s no source of sediment. The only thing that’s covering them is those damned zebra and quagga mussels.”

Despite the two invasive species covering every rocky surface, Mr. O’Shea admitted the team does owe some gratitude to the bivalves. The filtering action of the mussels has created a water clarity allowing for the study.

“Except for the temperature, it’s like diving in the Carribean,” Mr. O’Shea said.

Since 2005, Mr. O’Shea and a multi-disciplinary team of researchers from several universities in both the United States and Canada have been studying the ridge. In 2009, the team announced a hypothesis that the ridge was a “killing lane” for the indigenous people living in the region. The hypothesis was based on the discovery of rock formations that appear to have been modified by human hands. The formations—hunting structures and blinds to hide the spear-hunting people—are scattered all along the 160-kilometre-long ridge.

This past summer, members of the team were using a remote operated vehicle (ROV) to scan an ‘interesting’ area on the ridge, which had been identified using sonar. The camera spotted what appeared to be a wooden pole lying on the floor of the lake.

“It was exciting,” Mr. O’Shea recalled. “There’s nothing down there so it stood out.”

The team used the ROV to gently grip the pole—and then the boat’s power died. The lights went out, the ROV’s screens went dead, and the robot began to drift.

“Just imagine us all in the dark,” Mr. O’Shea said with a laugh. Despite the setback, members of the team quickly donned diving gear and followed the ROV’s cables down to the robot.

However, the team found the robot, and after some quick scouting about, located the pole and brought it to the surface.

Since being brought to the surface, the team has kept the pole submerged in frigid water to prevent bacterial growth and stop the artifact from decaying. A piece that broke off was radiocarbon tested and provided an age of roughly 9,500 years in age.

The pole, despite being ‘just a pole,’ represents a milestone for the team and also validates several hypotheses.

“The fact (the pole) is there at all is significant,” Mr. O’Shea said. “It means it was a ‘gentle’ rise of water. It’s spruce, so it matches the (computational) models. It’s the right type for the right time.”

The pole is being studied by part of the team to see if it was modified by human hands. If it was, that is also important.

“This would be the first organic artifact we’ve had from the region,” he said.

This coming summer, the team will be back on the lake looking for more history on Lake Huron’s floor.

“When we started, we were looking for structures,” Mr. O’Shea said. “We’ve found those. Now, we’re looking for settlements. Hunting sites versus camping sites.”

He has hopes the team will discover more organic artifacts, such as wood, bone and antler.

“We know antler was significant,” he said. “People collected it and used it for all sorts of things.” Though unlikely, he said it may even be possible to find preserved leather items in caves along the lake bottom.

“What’s really unlikely, but I’d love to find, is carved rock art,” Mr. O’Shea wished. “It would be amazing.”

Thanks to the quagga and zebra mussles, though, it will probably remain a wish.