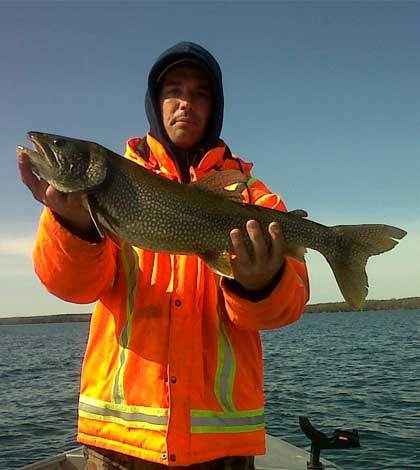 The Lake Manitou Area Association (LMAA) has a membership of over 230 seasonal and permanent residents, with a variety of activities including water quality monitoring. We have offered our initial comments to the Manitoulin Planning Board (MPB) on August 20, in support of section “D.1.1 Sensitive or At-Capacity Lakes” in the draft Official Plan (OP). Since that time, both Manitoulin newspapers have carried comments by local officials and/or MPB members that express concerns that this and related provisions of the draft OP place excessive restrictions on future cottage/residence development.

Without present comment on the entire draft OP, we offer comment on the applicability of section D.1.1 to Lake Manitou in particular. Lake Manitou is already “At-Capacity,” a designation which carries far greater specificity than the more general, “Sensitive,” Lake Manitou’s designation as “at-capacity” by the Ministry of Natural Resources (MNR) is based on very sound science, a fact which some quoted officials are apparently either unaware of, or, chose to dismiss for whatever reasons.

The balance of this letter are comments the LMAA recently sent to the planning board in this regard. We hope it will clarify for your readers and elected officials what has been scientifically demonstrated, and also, what is at stake:

It is important that board members understand the existing at-risk condition of Lake Manitou, and therefore the importance of taking measures to halt any further negative impact. Comments by some board members reported in the Expositor and Recorder display a lack of understanding of key aspects.

The standard of 7 mg/L of dissolved oxygen (as “MVWHDO”; basically the average of oxygen levels in the cooler, deeper layers of a lake that cold water fish are restricted to during the summertime stratification period) for the maintenance of lake trout fisheries is not something MNR pulled out of thin air. It is based on very sound scientific research carried out by Dr. David Evans of MNR and others. That research clearly demonstrates that lake trout “scope of activity” (for swimming, food capture, reproduction, etc.) is normal at oxygen levels of 7 mg/L or more becomes increasingly diminished across the range between 7 mg/L and 3 mg/L, and that death will occur at levels of 3 mg/L or less.

How did it get this way? What can be done? The answers are related.

The predominant cause of substandard oxygen levels is excessive phosphorus loading, leading in turn to excessive biological production. The subsequent decomposition of that biological growth consumes oxygen resources that would otherwise be available to support lake trout and other cold water fish species. It has been well researched and documented, for decades, that the vast majority of phosphorus loading to rural/recreational lakes comes from cottage/residential development, with its attendant operation of onsite wastewater systems (septic systems), as well as the land clearing and creation of impervious surfaces (roofs, paving, etc.) that increase the run off of airborne or surface-applied phosphorus. In the case of rural/recreational lakes, there is no “evil industry” or other exceptional cause to blame. As the introductory page to an MOE report put it over 30 years ago, “We have met the enemy, and he is us.”

There is still a viable (if probably stressed) lake trout population in Lake Manitou at the present time. However, further development, attendant phosphorus loading and resulting increase in deoxygenation could result in the loss of this provincially significant lake trout fishery. The presence of lake trout in many ways defines what a high water quality, natural lake is. In addition, the loss of a top predator species could have incalculable negative impact on the entire lake ecosystem.

Should this valuable fishery ever be lost, there are no measures that can be applied to restore it: The cottage/residential occupancy (phosphorus load) that caused it would remain and continue, there is no known or credible “technology fix” remedy that could be applied, and increased stocking would provide no solution for two reasons: First, stocked fish would be subjected to the same inadequate oxygen levels that caused the loss of the native strain of fish. More to the point, there would no longer be a source of genetic material to sustain the MNR hatchery operation at Blue Jay Creek.

The existing lake trout fishery is already at-risk, and it is essential that further development be halted in order to “turn off the tap” on increases in the type of impact that has caused the existing situation. If occupancy and the attendant phosphorus loading are allowed to increase, it could cause irreparable damage. LMAA therefore repeats our strong support for retaining the protections of “D.1.1 Sensitive or At-Capacity Lakes” in the final OP.

We also support the request and recommendation from MNR/Ministry of Municipal Affairs and Housing (MAH) that Lake Manitou be specifically named as being at-capacity in the final OP. This would support and assist section D.1.1.4’s statement that property owners are responsible for “being aware of the current classification of a lake at all times.” From talking with MNR/MMAH staff, it is also our understanding that specifically naming Lake Manitou in the OP would assist MNR/MOE in assigning priority to Lake Manitou in terms of devoting research and monitoring resources. It is our understanding from MMAH staff that subsequently removing the designation from the OP (in the unlikely event that oxygen levels later increase) would not require a subsequent amendment to the OP, but could be done as an administrative matter in the course of the mandated 5-year reviews of the OP.

It is our understanding from MPB staff that some board members feel that MNR/MOE has not clearly explained the sound science (summarized above) that supports MNR designating Lake Manitou as “At-Capacity.” LMAA has conveyed that feeling to MNR/MOE verbally, will repeat it to them by copies of this letter, and strongly encourage MNR/MOE to meet the board’s request that they attend a regularly scheduled meeting of the board in order to directly present the sound science behind the “At-Capacity” designation.

We wish to thank the planning board for the opportunity of presenting these additional comments on the proposed OP and related matters. Please do not hesitate to contact the individuals noted below should you have any questions.