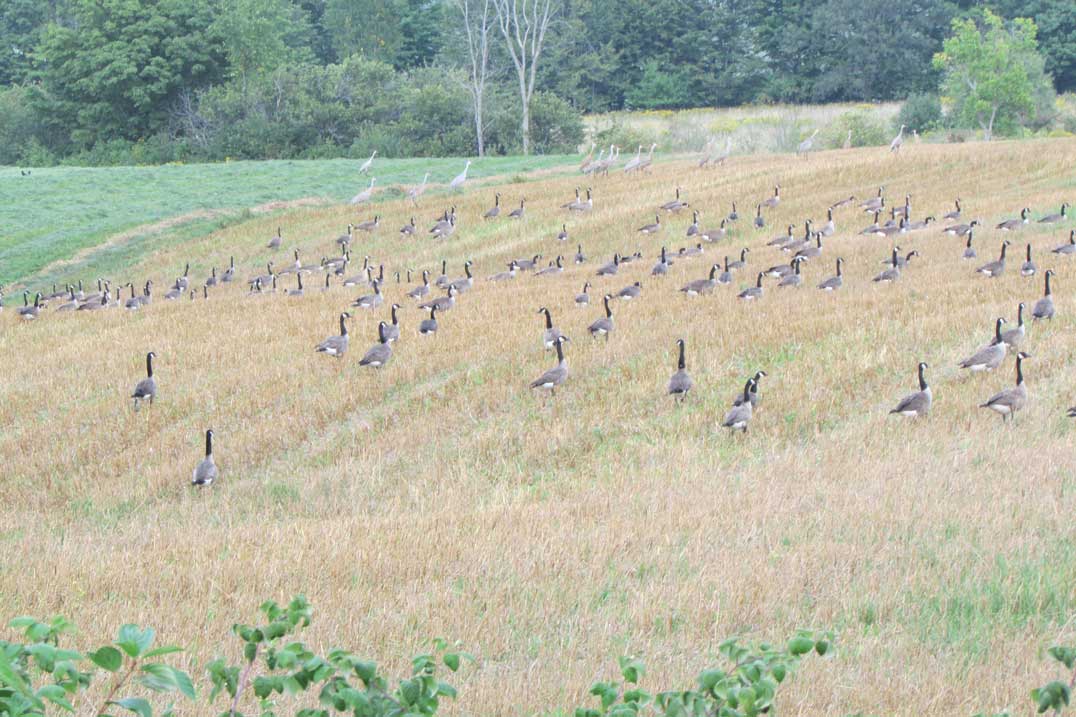 GORE BAY — A contingent of 10 farmers from across the Island gathered in the Provincial Offences Act (POA) courtroom at the Gore Bay municipal office last Thursday morning to show their support for Paul Skippen, the Green Bay farmer who killed a Canada goose without a permit in what he calls an act of defence for his farm and livelihood.

Mr. Skippen is facing four charges filed against him by the Ministry of Natural Resources and Forestry (MNRF): unlawfully hunting a migratory bird outside the open season, failing to immediately make every reasonable effort to retrieve a migratory bird, unlawfully discharging a firearm in the travelled portion of a right of way for public vehicular traffic and knowingly making a false statement to a conservation officer.

Mr. Skippen, in previous interviews published in this newspaper, explained that he shot the protected bird, leaving it as a gruesome reminder for other geese thinking of landing in his fields, after taking a hit of $10,000 in crop losses because of their appetite. He also believed he had verbal permission to protect his land from nuisance animals from a conversation he had with then-Minister of Natural Resources David Orazietti at an Ontario Good Roads/Rural Ontario Municipal Association conference on the subject of farmers and crop damage due to birds and animals. “I don’t understand why you just don’t shoot them (referring to the nuisance birds)—you’re a farmer, you have a right to protect your property,” Mr. Skippen reports the former minister as saying.

At the September 3 court date, Mr. Skippen chose to be represented by friend and fellow Green Bay farmer Ed Ferguson, which brought some confusion to the court.

MNRF lawyer Dan Williams told Justice of the Peace Darlene Hayden that he had received email correspondence from lawyer Brad Allison on behalf of Mr. Skippen in August, but had never heard from him again. He asked the Justice to confirm whether Mr. Skippen still had Mr. Allison for a lawyer.

“He is, at the moment, not Mr. Skippen’s counsel—at least for the moment,” Mr. Ferguson responded. “These counsellors are fairly expensive for farmers,” he added.

Mr. Williams told Justice Hayden he would like to have that fact confirmed as he did not foresee a resolution to this matter happening soon, suggesting a judicial pre-trial.

Justice Hayden explained to the court that a judicial pre-trial is done completely differently depending on whether the accused is represented by counsel, or representing themselves. (A judicial pre-trial sees the Crown and defense meet before a pre-trial judge to discuss the issues of the case where it is evaluated by an experienced judge. The pre-trial judge is not the same judge who will preside over the trial.)

“We’re not prepared to make that decision now, your worship,” Mr. Ferguson replied.

Justice Hayden noted that this was not the first time this matter has been before the courts, expressing her displeasure in the fact that it has failed to gain any movement in the court system.

“In terms of length, we will call three to four witnesses which will take over two hours,” Mr. Williams said. “It would be very prudent to have this issue pre-trialed—there are a lot of issues that could be resolved before we go to trial,” the counsel added, reiterating that he would like to know who is going to be representing Mr. Skippen.

The judicial pre-trial has been set for November 12 in Gore Bay, with Justice Hayden asking Mr. Skippen to report well before that date to Mr. Williams as to who will be representing him in court.

In an email to The Expositor following the court proceedings, Mr. Skippen confirmed that Mr. Ferguson will continue to represent him in court.