They gather at south shore staging points and then they leave

MANITOULIN – After about 10 years of declining numbers, monarch butterflies on Manitoulin Island, and elsewhere in North America, were much more common in 2019.

Starting in mid-May, there were reports of northward flying monarchs being found along our southern shores from Misery Bay to Wiikwemkoong.

My wife Marilyn and I watched a few rather ragged and tired individuals arrive on shore at Providence Bay in mid-May. Within a few days of feeding on the sugary nectar of spring flowers, they would have mated and spread about the Island looking for young shoots of milkweed on which to lay their eggs. Once the eggs were laid, the adults died.

From June to early August, there were monarch caterpillars on milkweed in most parts of the Island. Some of these caterpillars may have turned into chrysalises and then adults, early enough to produce a second generation of monarchs; however, in most cases, there is just one generation on Manitoulin.

That is, two or three generations of monarchs are produced along the route from Mexico to Manitoulin, and in all cases, the adults die after living for about one month.

On August 31, we watched about 100 monarchs in a feeding frenzy in a patch of goldenrod alongside roads near Lonely Bay west of Providence Bay. These monarchs were feeding on nectar which they then turned into fats, their source of energy for the long flight south.

We captured 30 adults near Lonely Bay and placed them in a screened cage on the back seat of our car and returned to Batman’s Campground near Sheguiandah.

The next day we held a public tagging and release at the campground. We placed each tagged monarch on the finger of a camper and within a few seconds, the monarch took off into the trees.

Watching a monarch on their finger thrilled campers of all ages, leaving them in awe that an insect weighing no more than a paperclip could fly to Mexico.

The release was an emotional experience for some campers who feel butterflies represent fairies and their appearance a connection with lost loved ones. Three young campers had recently lost their grandfather and for them, his soul took flight in the body of the monarch.

The people of Mexico welcome our monarchs to their mountains in late October as part of a multi-day holiday called the Dia de Muertos, or Day of the Dead where friends and families gather to remember those who have died and to help support their spiritual journey.

On September 7, Marilyn and I visited South Baymouth where several hundred monarchs were feeding on local flowers. We captured 20 and shared the tagging and release of 10 with local residents.

The next day, on September 8, not a single monarch could be found. All had left early that morning once the sun warmed their bodies.

We then tagged and released several of our remaining monarchs just as the Chi-Cheemaun was leaving port. To our amusement it appeared that some of the tagged butterflies were chasing after the ferry and we could imagine them yelling out ‘Wait for me.’

Likewise, no monarchs were found in Providence Bay the same day; apparently all had headed south over the bay that morning.

It was cold and rainy on Manitoulin on Friday, but on Saturday, September 14, we drove to Providence Bay where again, no monarchs were found. However, to our surprise, we did find some flying from flower to flower along Lake Huron Road, where we could hear waves crashing ashore on the nearby bay. We caught and tagged another 21 adults.

Is it possible these freshly emerged adults can detect the nearby shoreline of Lake Huron? Do they know that they are about to attempt the longest flight across water of all North American monarchs?

These adult monarchs are appearing late in the season; however, if it remains warm for another week, hopefully some will make it across Lake Huron and refuel in Michigan. After all, their parents successfully made the flight in the opposite direction a few months ago.

It will be an exciting day when a tagged Manitoulin monarch is found in Mexico proving that our monarchs successfully fly over 4,000 km to avoid winter conditions.

In the meantime, Manitoulin residents could plant milkweed seeds in their gardens this fall. With a little luck, monarchs arriving in 2020 will find new shoots and residents will be contributing to our understanding of the world’s most amazing natural wonder.

To monitor monarch migration and biology, check out Monarch Watch at www.MonarchWatch.org and Journey North at JourneyNorth.org/monarchs

Joe Shorthouse is a retired professor of biology at Laurentian University and a summer resident of Manitoulin Island. He is a member of the Steering Committee of the Great Lakes Islands Alliance and coordinating a project monitoring monarchs on other islands in the Great Lakes. 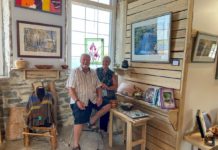 Expositor Staff - September 15, 2021
Prov rocks! Providence Bay really upped their game this summer and provided lots of activity for everyone and some will still continue into the fall....