SUDBURY – Support for Laurentian University continues to arrive from all quarters, with a group of retired professors and staff members penning a letter and federal NDP leader Jagmeet Singh calling for a moratorium on the ongoing creditor protection process, the first of its kind for a public institution. Now the Rainbow District School Board has stepped up, issuing a press release in which the board “reaffirmed its strong support for Laurentian University.”

During the regular RDSB meeting held on Tuesday, April 20, trustees emphasized that Laurentian is “an important partner in education that deserves a prominent place in the postsecondary sector.”

The release goes on to note that “many students, both locally and beyond, have pursued their studies at Laurentian University. They have earned degrees in highly respected programs, and achieved success in their chosen fields. Laurentian University has also supported the educational journey of students in Rainbow Schools through on-site fairs, lectures, special presentations and athletic opportunities. Laurentian University has grown to become a truly unique Northern institution offering English, French and First Nations programming.”

“Members of the board feel very strongly and spoke with deep passion about the immeasurable value of Laurentian University as partners in education and as an integral part of our community,” said Board Chair Doreen Dewar. “Trustees indicated that Laurentian University has not only provided access to higher education; more importantly, it has nurtured critical thinkers, built good citizens, contributed to the betterment of society, enhanced our quality of life, and been the source of immense pride.”

The Association of Retired Academics of Laurentian University (ARALU) and Association des universitaires retraites de l’Universite Laurentienne has issued a call for an inquiry into how the Laurentian mess was allowed to happen. In an open letter the ARALU board voiced its concerns saying, in part, “We all played a role in turning Laurentian University into an institution known for both its undergraduate education, research and graduate studies programs.

“We all developed research programs, wrote hundreds of scholarly articles, many books and publications, and were honoured to speak across Canada and around the world where we proudly represented Laurentian University and Greater Sudbury.

“This level of pride changed abruptly on February 1, with the announcement that Laurentian University was in serious financial difficulty and placed under the Companies’ Creditors Arrangement Act (CCAA) due to insolvency.”

The ARALU called for the inquiry to “Examine and report on the university’s finances over the past 10 years. This is to determine who made monetary decisions; announce who made the decision to enact the CCAA protection; obtain and report on any and all documents produced by Laurentian University administration, the LU board of governors and/or the Ministry of Colleges and Universities, as well as other ministries to determine what criteria were used to decide which faculty and staff were to be eliminated; this shall include whether or not Fontaine and Associates recommended a reduction of more than 30 percent of staff and faculty personnel; obtain and report on all correspondence between the upper administration of Laurentian University, its board of governors, and the government of Ontario concerning the financial crisis; obtain and report all documentation of internal and public statements made by current and past presidents relating to the financial health of the institution made over the past 10 years; obtain and report on minutes of all meetings of the board of governors over the past 10 years where details of the financial situation of the university were discussed; this shall include all budget documents produced by the university’s administration for the past 10 years; investigate, with the assistance of federal authorities if necessary, possible fraudulent expenditure of government grant funds destined for supporting salaries and research projects; investigate the unethical misuse of money, if any, donated to the university for program development and scholarships in the name of family members.”

The letter goes on to assert that “it is the opinion of the retired academics listed below that once the actions of Laurentian University administrators and board members are explained to the public, a plan to reverse many of the decisions announced on April 12 will occur, and the broader community will continue to build a university that plays its responsible role in Canadian society.”

The letter was authored by a number of former academics, including regular The Expositor contributor Joe Shorthouse.

The university has applied for an extension to its creditor protection to August 31 to enable the next phase of its restructuring process and is seeking a further $10 million in interim funding.

“Laurentian has filed with the court an affidavit supporting a request for an extension to the initial stay of proceedings through the summer, to allow the university to complete the next phase of its restructuring,” Laurentian University president and vice-chancellor Robert Haché said in a statement last week. “This affidavit details all of the work that has been accomplished to date and outlines what is needed in the next phase of the restructuring.”

At least two of the federated colleges (Thorneloe University and University of Sudbury) have indicated they would be challenging the unilateral dissolution of their federation by Laurentian University, while Huntington University and Laurentian have come to a separation agreement. 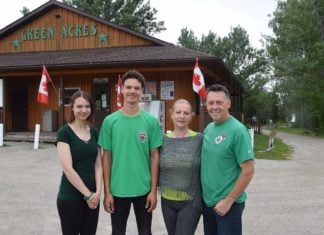