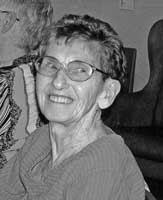 It is with great sadness the family announces the passing of Lena Fenton on Friday, September 20, 2013 at the Manitoulin Centennial Manor at the age of 83, with family in attendance. Precious daughter of the late William and Agnes. Predeceased by sisters, Isabelle, Pearl (Frank), Sally, Ruth and brothers William (Kay), Douglas (Ada), Donald, Robert and Garry. Will be missed by many nieces, nephews, and brother-in-law Bill Bryce. Lena grew up in Sudbury and as a teenager moved to Little Current with her family. In her adulthood she lived and worked in Toronto, moving back to her beloved Manitoulin Island in her midlife. She would wish any donations to be directed to the Manitoulin Centennial Manor Auxiliary, and we the family would like to thank everyone at the Manor and the volunteers for the love and kindness they gave our Aunt Lena. To celebrate her life an informal gathering will be held at Mountainview Cemetery in Little Current on Friday, September 27, 2013 at 11 am. Arrangements entrusted with Island Funeral Home.