MINDEMOYA – Lew Lanktree’s team took the top spot in the Mixed Bonspiel at the Mindemoya Curling Club. The team, skipped by Lew Lanktree, with Marion Hester (vice), Todd Bailey (second) and Carolyn Campbell (lead) were presented with their trophies and plaque by Jan McQuay. They beat out Deb Graham’s team skipped by Bill McCoy with Deb Graham (vice), Oliver Koski (second) and Judy McKenzie (lead) in the final game in the first event on Sunday, February 9. The winners and runner-up teams in all three events received gift certificates generously provided by the Manitowaning Mill, Rylan’s Clothing and Up Top Sports. Jan and Betty McQuay provided the trophies.

This was the 17th annual Dr. Jack and Mary McQuay Mixed Bonspiel. The success of the bonspiel, as always, is due to the hard work of the volunteers who put it on. President Mark Love especially thanked convenors Ken and Janet Stewart and Oliver and Debbie Koski, as well as Jeff McKenzie, Ray Malo, Jim Fairburn and Doug and Cathy King for all their work making the bonspiel run smoothly. 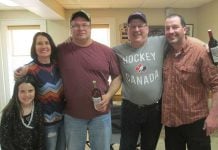 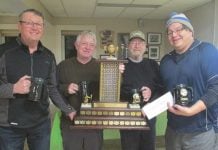 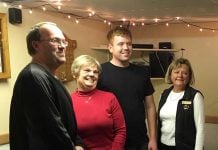 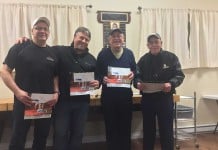