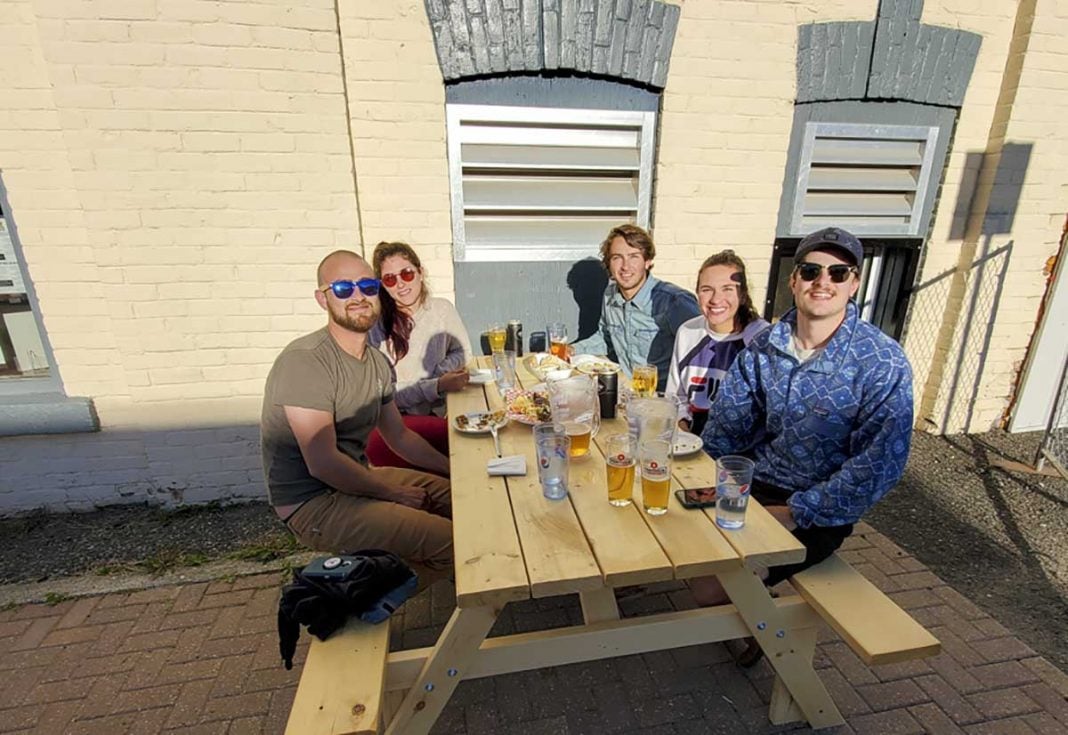 LITTLE CURRENT – The Little Current Business Improvement Area (BIA), with assistance from the Northeast Town, is open for business, albeit differently this summer, and are asking for residents and visitors alike to head downtown for some shopping and food.

“We’re here—we’ve survived this, and we’re planning on staying here, as long as we’ve got your support,” Shannon Cranston, owner of Loco Beanz in Little Current, put it plainly in a Friday interview. Friday marked the official launch of stage two reopening in this province, allowing for many more businesses in the province to open beyond just curbside pickup.

“The only way we’re going to continue to be here is with the sustained support of everyone,” Ms. Cranston added.

Northeast Town Mayor Al MacNevin hosted a Zoom meeting with interested BIA members on June 8, asking how the municipality could help give the businesses a boost. The downtown business community shared that a waiving of the sidewalk rental fees for things like patios and bistro sets would be appreciated, as would an increase in outside seating areas throughout the main street as many eateries have lost a significant amount of serviceable area while not being allowed to serve food indoors at present time.

At the June 9 meeting of council, council approved the waiving of sidewalk fees and allowed for an increase in picnic tables in Soldier’s Park and new ones at Expositor Square. The municipality has also ordered three hand-washing stations that will be placed downtown and has opened some of its public washrooms.

The Expositor Office created an ‘open for business’ graphic for use on social media for the downtown merchants and launched it Friday. By Monday it had reached over 5,500 people, according to Kendra Edwards of The Expositor’s creative team who designed the artwork.

Ms. Cranston explained that a number of bistro sets have been ordered through the BIA.

The Anchor Bar and Grill won’t be putting its patio deck up this year, but instead has six picnic tables with umbrellas that run along the Worthington Sidewalk, cordoned off with fencing supplied by the town. A few tables also complement the Anchor’s outdoor seating area on its Water Street side. And yes, spirits can be served outside.

Ms. Callaghan asked those visiting the Anchor and downtown businesses to be patient as everyone learns to adapt to a new way of operating and be mindful of physical distancing practices.

“We have to follow new rules,” she continued, giving the example of larger parties of people who come to dine not being able to pull tables together as they once did. “Remember, this is new for us too.”

Ms. Callaghan said there are many things that she and her staff need to think about, too. “I tell my staff that if someone orders hot sauce and they bring them the bottle, that bottle will need to be sanitized. Instead, they need to remember to use portion cups.”

Mayor MacNevin hosted another Zoom meeting this past Monday open to all members of the municipality’s business community.

Mayor MacNevin said many of those businesspeople on the call queried as to why the Ministry of Transportation’s (MTO) sign calling on people to stay home and limiting travel to non-essential needs remains, this while the Chi-Cheemaun is servicing all travellers. Mayor MacNevin said he would be speaking with the MTO about the sign.

The non-downtown businesses also asked if some municipal picnic tables could also be spared for their use. The mayor explained that picnic tables will be supplied to the green area that borders 3 Cows and a Cone and the Manitoulin Hotel and Conference Centre.

A handout, also created at The Expositor Office by Ms. Edwards, a co-operative effort with the Northeast Town’s economic development officer Heidi Ferguson, to include all available public washrooms and outdoor seating areas, is in the works and will be given to all the businesses for distribution.

Both Ms. Callaghan and Ms. Cranston acknowledged the efforts of their fellow BIA members as well as the Northeast Town.

“Everyone has been working together and is really helpful,” Ms. Callaghan added.

“We need to support each other,” Ms. Callaghan continued. “Shop local, have a staycation.”

“Thanks to everyone in advance for being supportive,” Ms. Cranston said. “And please don’t be afraid to come out. We’re all trying to make this a safe and welcoming space. Please come and see us!”

For more downtown Little Current shopping, head to the NEMI Farmers’ Market each Saturday morning beginning this Saturday, June 20, 9 am until noon.