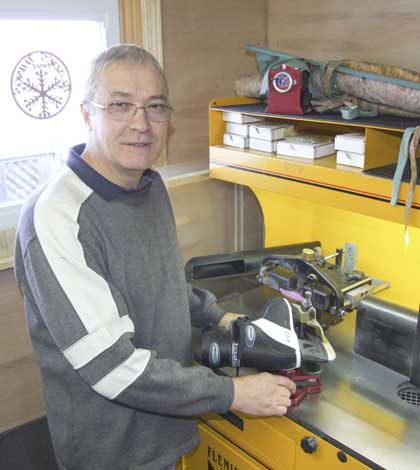 LITTLE CURRENT—Dale Baker knows a thing or two about skates, figure and hockey-speaking, having spent the past couple of decades putting an edge on some very well known artists of the ice in both the figure skating and hockey worlds.

The former capital region blade sharpener and Nova Scotia expat and his wife Barbara have relocated to the Island, bringing to their Water Street home in Little Current the machinery and expertise to give a winning edge to local competitors. The Bakers have opened Blades and Things, a new skate sharpening business located in a retrofitted bunkie in the back of their home.

The Bakers recently purchased the Spence home on Water Street, a location with an outstanding view of the North Channel and the Little Current swing bridge. Having operated a sharpening business in the Ottawa region for many years, opening another sharpening business just made sense. Ms. Baker was just finishing her last day at Telus before retiring as The Expositor was interviewing her husband.

Mr. Baker explained some of the misconceptions around the art, or rather science, of skate sharpening. “A lot of people think that if there are sparks, you are accomplishing something,” he said. “There is a lot more to putting a proper edge on a set of skates than that.”

“Sydney Broadbent wrote ‘Skateology’ and put the math into skatesharpening,” explained Mr. Baker. “You can look up the hard facts that he has brought to the world of skating.” We did and the Google search provides a pretty impressive list of writing credits and journal articles.

Mr. Baker took his training in skate sharpening from former Olympian Neil Carpenter out of Mariposa near Barrie. “We did a lot of research on where to get the training while I was still living in Nova Scotia,” said Mr. Baker. “He was the best out there.”

Most of his business comes from through the reaction of experienced skaters and professionals when they see the difference first hand. “Coaches are the key,” he said. “When you have the coaches, you are in. The coaches are on the ice watching the kids and coaching in general has become far more educated in recent years.”

The Senator’s alumni team were some of his best customers in the last few years. “I had most of the firefighters, the police and groups like that,” he said.

Mr. Baker advises that anyone really serious about their skates and maintaining an edge bring their skates into him before they are first sharpened for an assessment. “It is hard to sharpen a banana,” he said. “Skates are mass produced, mostly in China, and the people inspecting them are not necessarily the most attentive or well paid. There might be a dozen skates go by on the line before they notice a problem.”

One of Mr. Baker’s biggest business challenges in Ottawa was the sheer volume of skates that came his way, too often at once. He said he hoped to balance that out here on Manitoulin by scheduling appointments. “If you are travelling all the way in from Gore Bay or Espanola, you want to find someone here ready to take care of your skates,” he said. In Ottawa, being located beside one of the local arenas, he often had several teams coming in at once to have their skates sharpened and sometimes the skates would arrive through carrier by the bin load. “The farthest away I had skates come from in Ottawa was Kapuskasing,” he said.

Of course sharpening doesn’t stop at skates. Mr. Baker said that come summer he will be sharpening lawn mower blades, axes, knives and “just about anything that needs an edge.”

In addition to sharpening, Mr. Baker has the tools and expertise to add eyelets, mount blades on boots and a host of other repairs. Blades and Things can be reached at 705-368-3114.