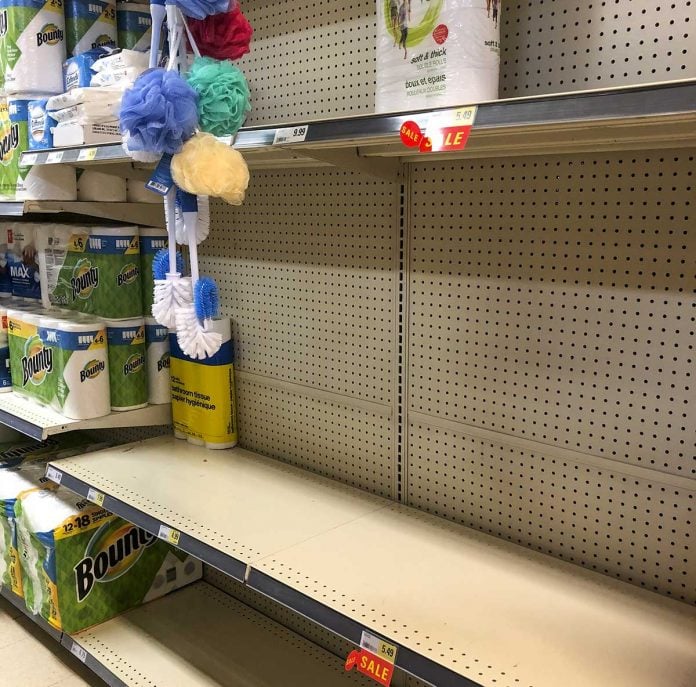 LITTLE CURRENT – In late February after the Canadian government encouraged its citizens to stock up on household supplies and food in case they contract COVID-19 and have to self-isolate, many people bought up mass amounts of goods in a rush that has left many stores in large population centres with barren shelves.

That meant many people were unable to gather supplies for themselves, and if they did the prices were often marked up several times above what the few remaining items would normally be worth. This, in addition to low-income earners or those on fixed incomes such as retirees, meant many people could not get adequately prepared.

A Little Current business, however, is taking a very different approach and is instead offering sales on certain items in-store and giving away tens of thousands of canned goods in its free centre. But for the people who work at Barney’s Bargain Barn, it’s just another day at the office, albeit an unseasonably busy day at the office.

“We’ve seen across-the-board increases in the store but the one thing that’s really up is our free centre. We’re having a bit of a hard time to keep up with it; we’ve seen exponential growth,” said Rodney ‘Barney’ Deforge, owner of Barney’s Bargain Barn and a pastor.

“Folks just want to stock up but they can’t afford it,” he said.

Barney’s Bargain Barn is a discount store that sells close-to-code or otherwise discounted merchandise, in addition to running a free food giveaway centre. It first opened in Manitowaning and ran free food giveaways out of the Assiginack Curling Club, then moved to the former Manitoulin Lodge Resort property, a building in east Little Current and finally its present location at the corner of Worthington St. and Vankoughnet St. in Little Current.

In the winter glut around February and March, Mr. Deforge said he normally facilitates one truck per week for items in the free centre. Recently, however, he has been bringing in three trucks per week, a rate that is normally reserved for the peak weeks of summer.

In the last two weeks alone, Barney has given out more than 50,000 pounds of free canned goods, with more trucks arriving to the free centre regularly.

“The stuff we’re bringing in is vegetables, canned pastas, pork and beans,” said Mr. Deforge. “We’re not in a panic ourselves but we understand some people are.”

On the day The Expositor spoke with Mr. Deforge, he was also welcoming a shipment of 40,000 pounds of frozen food.

“If people are going to be quarantined for two weeks, the average person doesn’t have that much food in their house. Us solid farm folks, we do, but the average family doesn’t anymore. That’s why we decided to go heavier on canned and dry goods to help in the best way we can,” said Mr. Deforge.

More than 1,200 people visited the free centre on Saturday, March 7 alone, a figure he called “astronomical” for this time of year. Free centre customers have come in from as far as Wawa.

The store portion of Barney’s Bargain Barn, which carries discounted goods, has taken a different approach than companies that have marked up high-demand items like hand sanitizer (although the store does not carry that in-demand product).

“We’ve also cut prices in our store too, so people can have the option of getting more stuff that’s not in the free area. We’re running a lot more sales now for people that want to purchase a little bit of extra stuff too, but most families are getting what they need from the free area,” said Mr. Deforge.

Why not capitalize on an easy situation, when shoppers are desperate and more willing to pay exorbitant amounts for needed items? For Mr. Deforge, who is also a pastor, his business has always been based around giving families the support they need to lead healthy lives.

“At the end of the day, if there’s peace in the home then the home is happy. That’s our number one goal, as long as the kids are getting fed,” he said.

Since there is no means test in place, many people who go through the free centre are not at risk of going hungry, a fact Mr. Deforge recognized. He said that fact does not bother him and referenced a statistic that perhaps one in 10 customers is truly in need. However, if the focus is on the nine then the one customer truly in need of support may go hungry.

“You have to concentrate on the greater good—you go in knowing some folks will take advantage, but if you’re helping a couple of families at the end of the day who wouldn’t have food and now get to eat, it’s worth it all,” said Mr. Deforge.

“I do know we have about 10 families in the Little Current area that eat exclusively from the free area because they can’t afford anything else right now. If we stopped doing it, what are all these kids going to do? That’s why we’ve upped our game and are going strong, at least until the end of the flu season at the end of April,” he said.

Mr. Deforge, who celebrated a birthday in the midst of the COVID-19 rush, said eating good food was important for health and that he was happy to help people in need within the community.