Branch #177 has done a 180 degree turn in the last year (when this newspaper wrote a story following the Legion’s meeting then that spoke of a negative account balance and a need for new members.)

President Debbie Menard gave her report to the members, beginning with the financial struggles that plagued the Legion last year. Comrade Menard listed the many fundraising ventures the Legion had undertaken since then, including dinners, monthly brunches and spaghetti suppers, dances, pool tournaments, wing nights, dart nights, silent auctions and yard sales.

“Thus, we have worked very hard in the last year with numerous functions and this, in effect, has brought the Legion out of the red and into the black,” the president said. “We only have a handful of dedicated Legionnaires (a very good working crew) and helpers along with students needing community service hours to help us with our Legion endeavours. The branch is in a good financial position at present. It will not stay that way if these endeavours do not continue on a regular basis. More help is required with such functions as it gets too tiring for the same people.”

She went on to thank the many local businesses who have helped the Legion in its fundraising efforts. “Thank you all. I extend a huge thank you to all the volunteers who have brought Branch 177 to this position of stability. Comrades, let’s all work together to see Branch 177 to its 90th anniversary.”

Treasurer Gord Keatley, in his treasurer’s report, noted that the Legion would likely see a profit of between $5,000 and $6,000.

In other business, Comrade Sue Morin made a motion to donate $500 from the Poppy Fund to the Red Cross for Fort McMurray fire relief.

Comrade Luc Noel, membership committee chair, also noted that new easy to fill out membership forms will soon be found throughout Little Curent businesses in the hopes of boosting membership.

Comrade Linda Bowerman, secretary, spoke of the three funerals the Legion has participated in recently: Jim Wemigwans, Humphrey Beaudin and Harold Morphet. Donations to the Legion from memorial tributes to Mr. Morphet have amounted to $1,600 so far.

“I make a motion that we purchase two bar stools in honour of Comrade Morphet,” Comrade Bowerman said, noting that the Legion was “his second home.” The motion was seconded by Aline Stephens and carried. There will be a remembrance service at the Legion on Saturday, June 11 for both staunch Legion supporters Mr. Beaudin and his nephew Mr. Morphet. 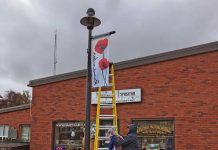