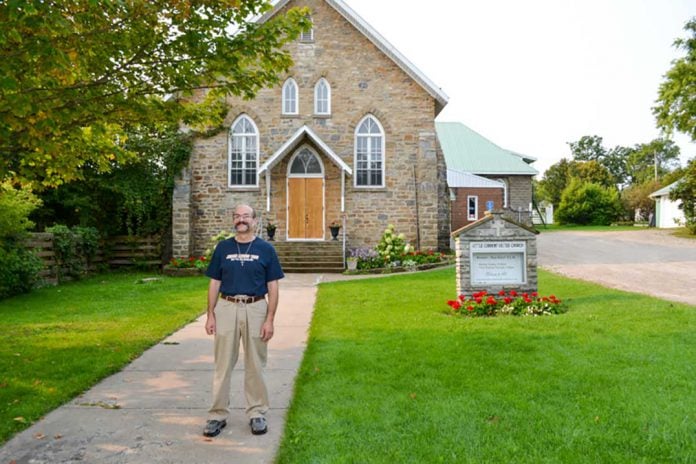 Pastor Paul recently moved to Manitoulin from Cochrane, but officially started at the Little Current and Sheguiandah United Churches on July 1 of this year.

He is no stranger to Northern Ontario, growing up in Kirkland Lake.

“I didn’t start in the ministry right away,” explained Pastor Paul. “I worked for Northland Telecommunications for 24 years as a telecommunications tech. The job took me all over—I spent a lot of time in Timmins, but also Moosonee, Hearst and Swastika.”

“In 2009 I finally decided that I wanted to serve the church and ministry,” Pastor Paul continued. “I asked the church (the United Church of Canada) and started the discernment process. A group was formed to help me identify if this was my calling. After a year and a half they made the decision based on my philosophies and my faith focus and decided that my interests and skills would be suited to becoming a minister.”

Pastor Paul started the Designated Lay Ministry Program (DLM), a three-year work-study program that trains individuals to be a minister as they work.

“It’s like a co-op,” said Pastor Paul. “It was a full-time job, so I quite my job at Northland—I just felt called to work in the ministry.”

Pastor Paul worked at St. Paul’s United Church in Cochrane as he completed the DLM program, which included online distance education courses as well as twice a year extensive two-week sessions in Saskatchewan.

“I completed the course in the fall of 2016 and was the minister at St. Paul’s until earlier this year,” he said, noting that he had to leave due to budget restraints and the church no longer being able to have a full-time minister. “I needed a full-time ministry position and applied to Manitoulin.”

Pastor Paul was offered the position at the Little Current United Church Pastoral Charge and accepted. “I was really impressed with the congregation, the people and the area,” he shared.

Since starting at the pastoral charge in July, Pastor Paul said he felt that the both the congregations and community have been very welcoming.

“Little Current, and Manitoulin in general, is a very friendly place,” he said. “People are often willing to stop and chat and the church has gone out of its way to be accommodating, as I wasn’t able to move to Manitoulin right away. My wife Karen and I have a lot of pets and it was difficult to find a place to rent at first.”

The couple eventually found a home in Little Current and moved to Manitoulin along with their six cats and two dogs. “We are big animal lovers,” Pastor Paul said.

As for his vision for the church, Pastor Paul hopes to get more involved in the community.

“I was a Lion in Cochrane and would like to join the Little Current Lions Club,” he said. “I think it is a great organization. We also participated in the recent Manitoulin Pride event. I went to the meetings ahead of time and we were thrilled when they asked us to hold the social at the end. We had a number of volunteers from the church who helped with the barbecue. We were really impressed with the gathering and hope to host it again next year.”

Pastor Paul also plans to bring technology to the pulpit, incorporating PowerPoint into the Sunday service.

“With PowerPoint I can project the hymns up on to the screen,” he explained. “Rather than people holding a book and singing into their book, they can look up and project. It also allows me to incorporate a lot of extras like video clips, pictures or songs. I find that it sets a different mood and really enhances the service. I did it at St. Paul’s and it was well received.”

The new pastor has also introduced an open door day on Wednesdays from 1:30 pm until 5 pm. “It is open to anyone who wants to come in and sit, meditate, pray or even knit,” Pastor Paul said. “I also try to keep regular office hours Mondays to Fridays from 9 am to 5 pm.”

The Little Current United Church (LCUC) is located on Robinson Street in Little Current, with Sunday worship from 10 am to 11 am.

There will be a Saint Francis of Assisi pet blessing at LCUC this Sunday, October 1  at the 10 am service which is open to the congregation and community. People are invited to bring their pets (caged) or a photo of their pet.