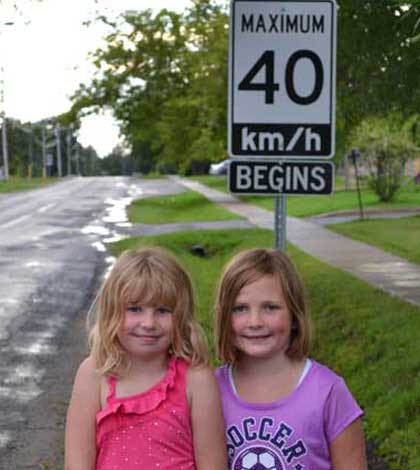 LITTLE CURRENT—Discussion prompted by a deputation from a Meredith Street resident concerning speeding in Little Current led the Northeast Town council to carry a motion to change the speed limit in Little Current to 40 kilometres an hour.

“I petitioned Highway 540 to Hayward and Meredith Street about lowering the speed limit to 40 km/hr and received over 50 signatures,” explained Ms. Stephens as she presented council with the petition, in addition to letters of support from residents. “I, and others, feel that 50 km/hr is just too high a speed and that the town should look into lowering the speed limit to 40 km/hr on all residential streets. We are worried about our children and people are coming down Meredith Street and other residential streets going 60 km and even faster. If a ball goes across the street parents are terrified.”

“I walk and drive that road daily and it is really busy,” commented Councillor Gauthier following the deputation.

Councillor Skippen questioned if council had the authority to lower the speed limit to which town CAO Dave Williamson responded that it did.

“I have been a strong supporter of lowering the speed limit and have put forward the motion before,” said Councillor Erskine prior to putting the motion on the floor.

Mr. Williamson noted that council had indeed explored lowering the speed limit before, but had determined it was not necessary at the time.

After the motion was carried, Councillor Koehler noted that it would be key to work with the OPP in the future to ensure the new speed limit is enforced.

“I was shocked, but really happy council changed the speed limit throughout town,” Ms. Stephens commented to The Expositor following council’s decision. “I know a lot of people are going to be happy. At the end of the day if you post 50 km/hr people are going to go 60, but if you post 40 at least people will only go 50. I don’t know why that’s the mentality, but I’m happy our roads are going to be safer for our children and for everyone. I really want to thank council for listening to mine and others concerns and implementing this change.”

Two other Little Current residents that were pleased with the change were eight-year-old Ava Ferguson and her sister seven-year-old Cameron Ferguson who both wrote letters in support of the speed limit change to council.

“We both wrote letters and our family signed the petition,” the Meredith Street sisters told The Expositor.

“Our dog got hit on the road because of a car going too fast,” said Cameron, “and we walk to the park everyday (at the library).”

“We also like to visit our grandparents that live across the road,” added Ava.

“It makes us feel safer now that the speed limit is going to be lower,” the two concluded.

Though council resolved to change the speed limit to 40 km/hr throughout the municipality, when speaking with Mr. Williamson Monday morning, The Expositor learned the change will not take effect immediately.

“Since the resolution has passed, it is in effect right now,” explained Mr. Williamson, “but council still needs to amend the traffic control bylaw and the new speed limit will not be enforced by the OPP until the new limits are posted.”

Mr. Williamson added that the town will be hiring an engineer specializing in traffic control to verify if one sign can simply be placed at the entrances to the town stating the speed limit is 40 km/hr throughout the entire town, or if signs will have to be placed at each intersection throughout Little Current.

When asked about the cost of the new signs, Mr. Williamson responded that the cost will be born by the municipality and come out of the roads budget, but at this point the number of signs was still not determined.