SHEGUIANDAH—It’s been just over one year since Richard Lathwell of Sheguiandah purchased a herd of alpacas and opened the Lobo Loco Alpaca Farm on Townline Road just west of the village of Sheguiandah. What started as an adventure and drive to utilize his large farm, which has been in use consistently since 1866, has turned into a thriving business with three employees managing the farm and a herd of 39 alpacas (plus three guard lamas).

“I have three employees: Mariana Lafrance, Noah Albers and our Jobs for Youth summer student, Emily Edwards,” explained Mr. Lathwell. “I am pretty busy with the Little Current and Gore Bay Farmers’ Markets and everything here including our store where we sell our products (wool, socks, mittens, hats (all made from Lobo Loco alpaca fiber) and preserves all made from produce grown here on the farm, as well as products from Pike Lake Farms.”

Mr. Lathwell took The Expositor on a tour of his farm, pointing out how the females and males are kept separate to avoid inbreeding.

“We don’t know precisely which females are currently pregnant as alpacas have an eleven and half month gestation period, but we should have our first round of cria (baby alpaca) in the next few weeks,” shared Mr. Lathwell. “I’ve taken some courses and the Nobles (who Mr. Lathwell purchased the herd from) have been very helpful. I think we are ready.”

Mr. Lathwell said the last year has been a blur, but a great journey.

“We have been so busy since we got started with barn renovations, building fences, and with shearing this year,” he said. “We had 30 people who came to help at the end of May and it took us three full days. We also trimmed their toes, teeth, microchipped any that weren’t already and gave them their shots.”

He explained that the hard part about the process was actually catching the alpacas, but once they are tightly attached to the shearing table, they are calm.

Mr. Lathwell also demonstrated how the skirting table is used to sort the fibers.

“You want fibers that are two inches or more, but one and half is good for felting,” he said. “After the fiber is cleaned and sorted, it is bagged by animal and classified based on the hair’s length, diameter and crimp. Smaller diameter and tighter crimp is better because it makes stronger yarn.”

Mr. Lathwell and his staff will be sorting the fiber throughout the summer before it is sent away to be spun into yarn.

“Keeping up with everything has been the most challenging element of running the farm,” laughed Mr. Lathwell to The Expositor’s inquiry. “Every day is something different, it’s not boring, that’s for sure.” 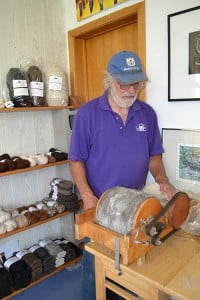 Mr. Lathwell said he was luckey to recipe a Northern Ontario Heritage Fund grant this year which he is using towards the purchase of new equipment for the farm.

Mr. Lathwell purchased 44 animals from the Noble Alpaca Farm herd (that had been located on Bidwell’s Scotch Line Road) in addition to the three lamas, after owners Glen and Rochel Totman put the majority of their herd up for sale two years ago.

The Lobo Loco Alpaca Farm is located at 800 Townline Road, RR1, Sheguiandah. The farm is open to visitors by appointment or by chance and alpaca fiber products can be purchased on site or at the Little Current Farmers’ Market Saturday morning or at the Gore Bay Farmers’ Market on Friday mornings.