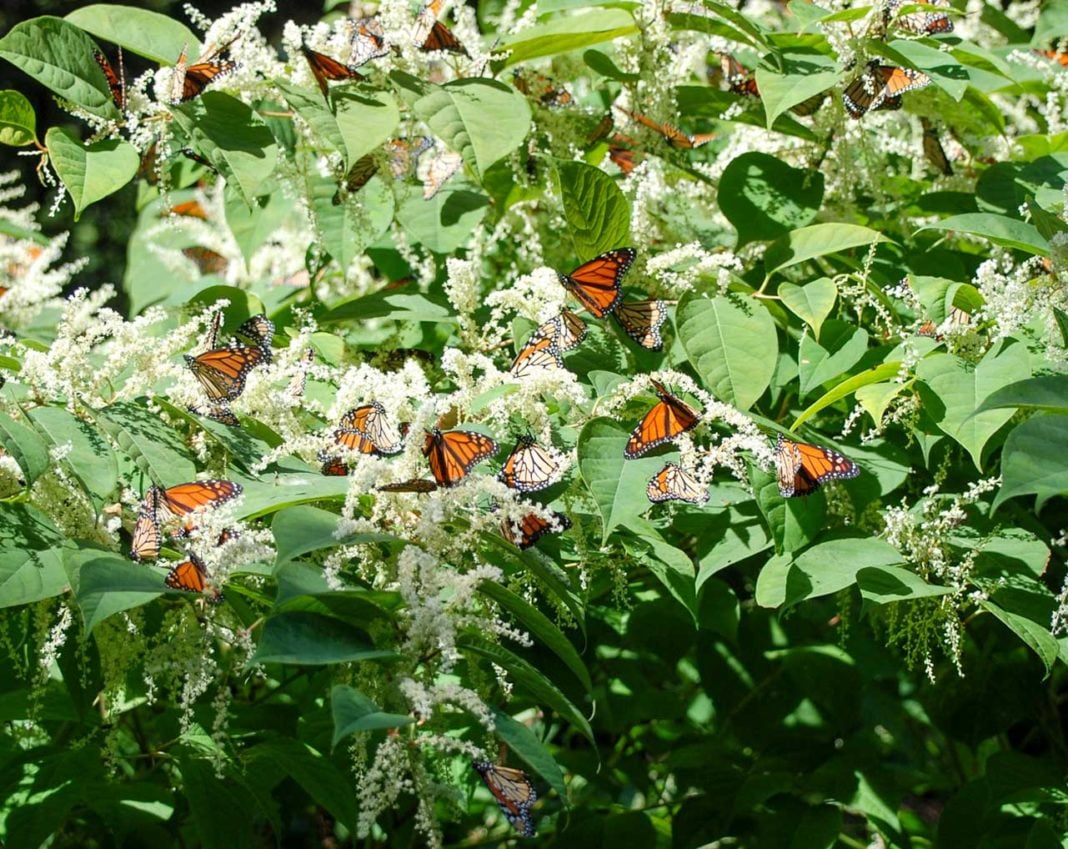 MANITOULIN – Studying monarch butterflies on Manitoulin Island has been a passion for my wife Marilyn and I for the past 15 years. We use our trailer at a campground near Sheguiandah as a base from which we drive about the Island searching for monarch caterpillars and adults.

Several articles have been written in this newspaper and others about our findings, along with many oral presentations. We have learned much about the lives of monarchs; however, one aspect of their biology we had not observed is their congregating on the south shore prior to crossing Lake Huron on their way to Mexico. That is, until the Labour Day long weekend!

Conditions were ideal on Saturday and Sunday for us to observe monarchs feeding (called nectaring) on goldenrod and other nectar-rich plants from Little Current to the south shore, along Highway 6. We captured and tagged many of them.

It became clear that monarchs were using this highway and the plants growing in the adjoining ditches and fields as their flight path to the south shore.

Monarchs became more abundant as we drove south and we were then amazed to find hundreds mid-afternoon in nectar-feeding frenzies on goldenrod and the white flowers of the shrub Japanese knotweed. They were also more common on private property near the shore line.

Some monarchs feeding on Japanese knotweed seemed intoxicated, allowing us to capture them with our bare hands. It is unfortunate that monarchs love Japanese knotweeds because it is a noxious, invasive weed and should not be planted.

Sunday night, there was a strong south wind and when we returned Monday, the monarchs were not feeding, but hanging in clusters 20 m above the ground on local trees. Waves of about 75 cm high were crashing onto the nearby shore of Lake Huron, but the monarchs were protected from the strong winds by dense trees.

These clusters are called roosts and are sites where migrating monarchs hang out during inclement weather and at night. Although there were reports of roosts in Misery Bay and Dominion Bay in years past, this was the first time we witnessed them.

Roosts are common along the migrating route to Mexico, particularly in Point Pelee and northern Ohio, but little is known about them on Manitoulin Island.

To confirm that monarchs were undertaking directional flight along the Highway 6 corridor, on Monday evening, as the sun was setting we watched southward flying monarchs glide out of the sky from twice the height of telephone poles and join others in roosts on poplar trees. How migrating monarchs locate roosts as they settle each night after a day of nectaring and flying, remains a mystery.

When we returned to the south shore on Tuesday, we became increasingly concerned as we did not see a single monarch along the highway, whereas days before they were so common, we could spot them from the car. When we got to the roosting sites, not a single monarch was present.

Lake Huron was completely calm when we arrived about noon; there was no wind, and the temperature was 12°C. The monarchs we observed roosting the previous day had apparently left Manitoulin Island in the morning and tackled the long flight across Lake Huron.

To our knowledge, this is the first report of monarchs nectaring, roosting, and then departing Manitoulin for Mexico, all within three days.

Our studies this summer showed three distinct generations of monarchs on Manitoulin Island. The first generation arrives in May and June from the northern US, lays eggs, then dies.

The second generation comes from eggs laid by the first generation. This is a reproductive generation where the males and females mate and lay eggs in June and July and the Island population enlarges. These butterflies do not migrate.

The third generation appears in August from eggs of the second generation and these adults have no interest in mating. Their sole objective is to feed on nectar, turn it into fat reserves, then fly across Lake Huron and continue south to Mexico.

It is possible the third generation monarchs in eastern Manitoulin are joined with those from Bruce Mines to Nairn Centre and are funneled to the North Channel crossing near Little Current, then south to South Baymouth.

It is unknown where the butterflies land once they leave the south shore. We suggest they are flying across Lake Huron to Michigan. The distance from South Baymouth to Alpena, Michigan is about 125 km, an incredible feat for an animal the weight of a paper clip. Furthermore, they must make the trip in one day.

It is also possible that some fly southeast to the Bruce Peninsula, a distance of about 45 km. From there they could join local butterflies and fly to Sarnia, Windsor, or Point Pelee, where fall roosts are frequently observed.

It is known that southern Ontario monarchs fly across Lake Erie from Point Pelee to Pelee Island, a distance of about 25 km, and then to Ohio, likely stopping on islands along the south shore of Lake Erie.

Further evidence comes from boaters on Lake Huron far from the shores of Manitoulin who have reported seeing monarchs flying rapidly or gliding in a southerly direction 10 to 30 metres above the water surface.

Monarch butterflies are designed for long distance flight. Their wings are strong and by using a combination of soaring and gliding, they can travel great distances with little expenditure of energy. They are also able to locate favourable tail winds. On windy days, they can attain speeds of 50 km/hour.

Like seagulls, vultures and gliders, monarchs are able to soar to great heights by locating thermals, air masses that rise because they are warmer and lighter than surrounding air. Monarchs commonly fly 100 to 300 metres from the ground. Glider pilots have recorded them at 1,250 metres and they have even been seen entering clouds.

Manitoulin Island plays an important role in the North American population of monarchs. Those that follow the urge to fly north from Michigan in mid-May find a land populated with healthy milkweed and nectar-producing flowers throughout the season. Conditions here are ideal for increasing the populations of the reproducing and migrating generations.

The third generation monarchs on Manitoulin find ample nectar to produce fat reserves for the flight to Mexico, a distance of 4,000 kilometres. Our monarchs are also special because of their flights across Lake Huron which is longest over fresh water of any monarchs during their migration.

It was an exhilarating, almost spiritual experience watching hundreds of monarchs swirl around our heads while nectaring on Japanese Knotweed and other nectar-rich plants near South Baymouth. We were fortunate to see two roosts and were reminded why monarchs and other butterflies serve as a colourful connection to the natural world.

Dr. Joe Shorthouse is a retired professor of entomology at Laurentian University in Sudbury and a summer resident of Manitoulin Island. He is a frequent contributor to The Manitoulin Expositor.