MANITOULIN – When it comes to preserving the walleye fishery for future generations the work of local fish and game and sportsman clubs cannot be overstated. Over the past couple of weeks the Little Current Fish and Game Club and the Whitefish Falls Sportsmen’s Club (with support from members of the Whitefish River First Nation) have released more than 100,000 walleye fry into the waters surrounding Manitoulin Island.

Once a fast-dwindling resource, the rebound of the walleye population has been a tremendous success story.

“The (Blue Jay Creek) MNR (Ministry of Natural Resources and Forestry) hatchery supplied us with up to 50,000 pickerel fry,” said Mr. Perfetto. “We raised them for five to six weeks in the Whitefish Falls rearing pond. Our volunteers then released about 25,000 to 30,000 in the waters of the North Channel area.”

“This is the first year that the Whitefish Falls Sportsmen’s Club and the Whitefish River First Nation have joined forces and we hope to continue this partnership for many years to come,” said Mr. Perfetto. The First Nation support has proven to be invaluable to the efforts to restore the walleye fishery.

Bill Strain of the Little Current Fish and Game Club said their members have been very busy as well. “We have been draining our walleye rearing ponds for the last week,” he said. “We finished up last Tuesday.”

Mr. Strain noted that the club’s conservation efforts are both multi-generational and international in scope. “Doug Hore is one of our club’s original members from back in 1966 and he is still going strong,” said Mr. Strain. “His two grandsons were out helping this year. We also had two guys from Ohio, who are members of the club, come out to help.”

“The fingerlings in the picture I sent you are 42 days old,” supplied Mr. Strain. “They range in size from one and a half to two inches. If you leave them too long in the ponds they become cannibalistic (not to mention a lot of other predators find the concentrated fingerlings a handy and somewhat trapped food supply as the fingerlings grow). We planted around 65,000 in area waters this year.”

As Mr. Perfetto stressed, “fish stocking is an important endeavour.”

The Expositor salutes the efforts of the volunteers from the Little Current Fish and Game Club, the Whitefish Falls Sportsmen’s Club and the Whitefish River First Nation for their tireless work and partnership in ensuring the walleye fishery will be around for the next seven generations to come. 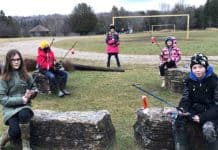 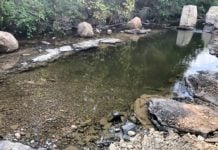 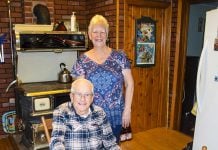 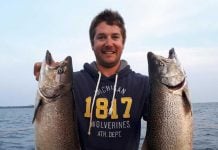 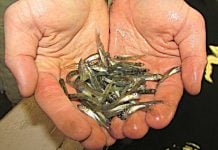 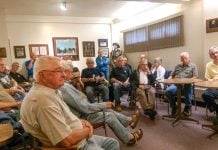